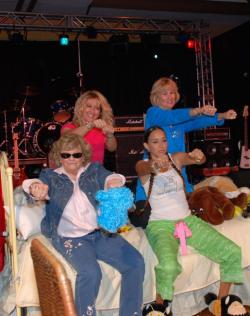 Emcee Drew Sattee introduced live musical performances by local celebrities.  The evening kicked off with The Five Boroughs, a doo-wop group entertaining guests during cocktail hour. South Florida’s rock band Ready, Steady, Go then took over the stage and performed with a line up of musical talents.

Surprises included a performance by the “Blues Brothers” a.k.a. Dean Randy Pohlman and Executive Associate Dean Preston Jones; the Rock “n” Rappers; and Martin Silverberg’s Elvis. The highlight of the evening was performances by special guest Nokie Edwards, lead guitarist of The Ventures.

Rock “n” Roll Night provides deserving students with the opportunity to receive their undergraduate business education at the largest private nonprofit university in the region. “The scholarship program has allowed me to focus on my studies; it’s such a great opportunity and it encourages me to strive for the best,” says Michelle Littke, recipient of the Eastern Financial Florida Credit Union scholarship.