What: A Black Tie Ball, The Boy from Jersey and Lots of Boats on the Waterway - The Winterfest Gala, Jersey Boy's Frankie Vallie and Seminole Hard Rock Winterfest Boat Parade 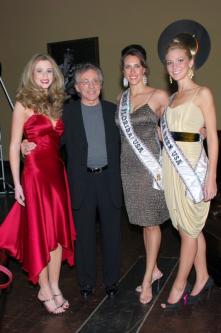 Although the evening started out with rain, the downpour of praise to all those involved in the production of the  35th Annual Seminole Hard Rock Winterfest Boat Parade, came pouring in, as guests enjoyed the waterway production in front of the parade's host hotel - The Fort Lauderdale Grande Hotel and Yacht Club - a LXR Luxury Resort Property and co-sponsored by J.R. Dunn Jewelers and Costa Cruises.  Spectators watched from viewing areas on bridges, in restaurants, from condominium patios, multi-dollar homes, as well as the Grandstand Viewing Area presented by Nestle.  The parade reaches a wide array of viewers, with a live spectator audience of 850,000 people, while additionally extending to millions more through media partners WSVN-Channel 7 and Comcast Channels 12 or 77 and thanks to Comcast's partnership with Fox SportsNet, residents throughout the state of Florida can view the parade "live".

The theme for this years parade was "Broadway on the Waterway" and the participants in the parade from the smallest boat to the mega Yachts did an outstanding job of decorating their boats in "Broadway Style".  The "World's Most Watched Boat Parade" will even be on the world's must see list for years to come.

The boat parade started with a bang with fireworks produced by Dynamic Effects Fireworks Company lighting up the rainy sky on the the Coca Cola, Publix and Marine Industries Association of South Florida (MIASF) Fireworks Barge.

OTHER BOATS THAT PARTICIPATED:
Florida Renaissance Festival / Pirates Dinner Theater aboard El Loro
Shake a Leg Miami  - “12 Days of Christmas”
DuckFest  aboard Lady Helen
Katonga - Budweiser aboard  Tykhe
Broward Marine - Nuts & Boats Total Vessel Care - Boys & Girls Admirals Club
Ivan's Keyboard Collection  / Fort Lauderdale Children's Theater aboard Aquaview
South Florida Presidents Council Motorcycle Barge - Toys in the Sun Run
Chabad Lubavitch - Flamingo
(For a complete list of parade participants please go to www.winterfestparade.com).
CHAMPAGNE POMMERY WINTERFEST BLACK TIE BALL
In Association with Patron  and Clos Du Bois brought the Bright Lights of Broadway to South Florida
Emphasizing the theme “Bright Lights of Broadway,” this year’s Winterfest Black Tie Ball was the ticket for a highly energized evening. Tagged as the largest holiday gala in Greater Fort Lauderdale and the social event of the season, the Ball was once again hosted by the Seminole Hard Rock Hotel and Casino.
Champagne Pommery presented the Winterfest Black Tie Ball, in association with Patron and Clos du Bois wines, which began with the JM Lexus Welcome Reception & Wachovia Silent Auction.
Renowned for its size and scope, the Welcome Reception & Silent Auction offered complimentary cocktails, martinis and hors d’oeuvres, with over 150 items for guests to bid on. Musical entertainment and a 35 year retrospective of Winterfest provided a visual and audio backdrop for the area.
Honored during the evening of December 9th: Belle-of-the Ball Nancy Daly.  Nancy has been involved with Winterfest for over a decade.  As past Chairman of Winterfest, Nancy was the driving force in focusing upon the entertainment aspect of the parade and she has continued this involvement with the Circus Barge.  Nancy is also known for her work with Habitat for Humanity of Broward County for fourteen years.  Her dedication and hard work also earned her the title of Chairman of the Board as well.

Ball Co-Chairs  Susan Renneisen and Lori Macala; Winterfest were honored by Chair Rob Kornahrens as well as a Nova Southeastern Univeristy Scholarship was given to The Boys and Girls Club on behalf of J.R. Dunn Jewelers.
The thrilling and competitive live auction included a 2007 JM Lexus IS 250, a Southern Wine & Spirit Winery Estate Tour package, a 11-day Mediterranean Costa Cruise, Super Bowl Tickets, a $5,000 Shopping Spree from Bass Pro Outdoor World, Original Poster Art from 3-D Pop Artist Charles Fazzino and a Party Package aboard Tikki Beach and the yacht Saviore Fare. Other exciting items, including a jeweled purse from J.R. Dunn Jewelers.
Guests enjoyed a fabulous gourmet dinner, live entertainment as the band Legacy performed with special performances of show tune favorites. NBA star Shaquille O’Neal stopped by to say hello to the Winterfest group that hosted him as Grand Marshal in 2004. The evening culminated with a special performance from the Pussycats – a cutting-edge dance and theatre combined performance. This explosive evening rivaled theater performances in Las Vegas and New York.

Frankie Vallie was presented the key to the city of Fort Lauderdale, by Mayor Jim Nagle and a brick with his name engraved on it to be placed on Riverwalk was presented by Riverwalk, Inc.

The culmination of weeks of preparation and events of course was the successful, spectacular Seminole Winterfest Boat Parade on December 16, 2006 "Broadway on the Waterway".