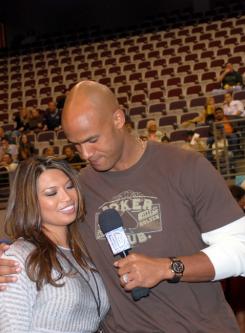 HOLLYWOOD, FLA - Tennis professional, Andy Roddick, one of the most celebrated athletes in the U.S. since 2001, joins a star-studded list of celebrities including Nicky Hilton, Mandy Moore, Barry Sanders and Venus and Serena Williams among others for the Inaugural Andy Roddick Charity Celebrity Poker Tournament on December 8 at 6:30 p.m. $1.4 million dollars was raised through the Andy Roddick Foundation.
This was a once in a lifetime opportunity to play Texas Hold’Em with some of the hottest celebrities around while supporting charities treating abused and at-risk children through the Andy Roddick Foundation. First prize included a seat in the 2007 WPT Celebrity Invitational and three nights at the Commerce Casino in Los Angeles, Calif.  The second-place winner received a seat at WPT Boot Camp®, a two-day tutorial featuring an integrated curriculum that includes live lecture from poker’s most dynamic poker players and insiders, archived footage from the WPT and interactive game playing. The third place winner received two seats to a "sold out" dinner and auction on December 9 and two VIP canopy seats to a tennis event on December 10 at The Polo Club Boca Raton.
A donation of $1,000 reserved a seat in the tournament plus a guaranteed premiere celebrity at your poker table, an official after-party VIP Pass, a personal meet-and-greet with Andy Roddick, open bar, and hors d’oeuvres. A $500 donation secured a seat in the tournament, open bar, and hors d’oeuvres. Spectator seats were sold for a $20* donation to view all the celebrities and poker action.
About the Andy Roddick Foundation
The Andy Roddick Foundation, dedicated to “Helping Children Today for Tomorrow,” is a 501c(3) not for profit organization, that has targeted children’s programs like Kids In Distress, Deliver the Dream Foundation,  A Safe Haven for Newborns, Children’s Diagnostic Center and Treatment Center,  Back to Basics Angel Fund, Sun-Sentinel Children’s Fund, Here’s Help, Settlement Home, Austin Children’s Hospital, Glimmer of Hope and The Tiger Fund.

Andy Roddick stated, "We couldn’t be more thrilled with the overwhelming generosity and support for such a crucial cause,” said Roddick. “This partnership with WPT Events and the beautiful Seminole Hard Rock Hotel & Casino will make this a flagship event for the Andy Roddick Foundation. We look forward to what this event will help provide–fostering more awareness, hope and opportunity for at-risk children and families.”