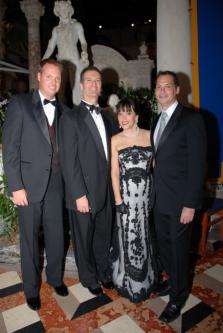 The gala, themed as "The Golden Anniversary Ball", was co-chaired by Norma Quintero and James W. Murphy.  Along with their dedicated committee of peers, the Vizcayans welcomed notable guests comprised of the movers and shakers and philanthropists from Miami and the tri-county area.  All net proceeds from the Ball will benefit Vizcaya Museum and Gardens.

"This anniversary gala is our most spectacular Ball to date celebrating the numerous accomplishments made by the Vizcayans over the last half-century on behalf of "Vizcaya Museum and Gardens" states Norma Quintero, Board President of the Vizcayans.  The enchanting setting and live, continuous musical performances of the Steve Chase Band entertained a glamorous party of more than 500 guests sipping on top-shelf aperitifs, champagne and spirits, Roberto Cavalli premium vodkas and Kendall Jackson Reserve wines.  The cocktail reception, held both inside in the Main Courtyard and outside on the South Terrace, flowed nicely with soloist musical interludes room to room commencing with a solo harpist at the first entrance of Vizcaya and violinist and flautist solos performed inside the House and on the South Terrace.

A Joy Wallace Catering Production was responsible for the exwusite food and intricate details surrounding the first-class service for ehte ntire evening beginning with a champagne greeting cocktail reception and culminating in a well-orchestrated, four-course dinner masterpiece, delivered to guests seated at lavish, elegantly set, dinner tables.  Floral arrangements and table decorations were provided by Ana Moran-Varela of Emerald Bouquets.

The Vizcayans is a non-profit corporation chartered in 1957 to promote an active appreciation and patronage of the arts and of Vizcaya and to provide for the care, maintenance, support and success of Vizcaya as an art museum.

Welcome to Vizcaya Museum and Gardens

Vizcaya is a National Historic Landmark; we're also a museum owned by Miami-Dade County and accredited by the American Association of Museums. Vizcaya is open to the public 364 days each year, and we invite you to visit this serene and stunningly beautiful retreat in the heart of Miami.

Vizcaya was built by agricultural industrialist James Deering, who wintered on the property from 1916–1925. Today, the extraordinary European-inspired estate includes a Main House filled with art and furnishings, ten acres of gardens on Biscayne Bay, a hardwood hammock (native forest), and an historic village that we’re restoring for public enjoyment.