Entertainment: Dave Barry and his band The Rock Bottom Remainders 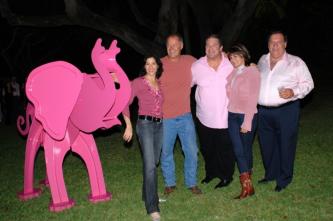 The atmosphere was electric, with all the guests anticipating the unvailing of the "Pink Elephants" by artist Fredrick Prescott, from Sante Fe, New Mexico, at the home of Jeff and Yolanda Berkowitz.  Guests arrived dressed in their version of pink attire, were served "pink cocktails" decorated with Pink Elephants.. What else?  Scrumptious food was provided by Thierry's Catering and Event Design.

Jeff and Yolanda thought that Jeff's passion for Pink Elephants and the arrival of the Pink Elephants to their home, would be a perfect venue for a party for Yolanda's passion, which is the Voices For Children Foundation and it's Guardian Ad Litem  program.

Music was provided by Dave Barry and the Rock Bottom Remainders, a literary rock band whose other members sometimes include Stephen King, Amy Tan, Ridley Pearson and Mitch Albom. "They are not musically skilled, but they are extremely loud." (This amature writer did not say this, it is a quote from Dave Barry's website!)

Joining Dave and the Rock Bottom Remainders, band members, was popular South Florida early morning DJ personality, Paul Castronovo,105.9.  Paul and his long time radio partner "Young Ron" are known for their support of many non-profit organizations  in South Florida and he was more than happy to lend his voice to the band and support Voices For Children.

Dave and the Rock Bottom Remainders band members for the night, happened to be in town for the annual Miami Book Fair International and Yolanda thought they would be a perfect band for the event.  Dave Barry, retired, was a humor columnist for 25 years. He was a syndicated columnist whose work appeared in more than 500 newspapers in the United States and abroad, including the Miami Herald.  In 1988 he won the Pulitzer Price for Commentary.  Many people are still trying to figure out how this happened. (I did not write that either, this was also on his website).

As we all know there can often be a story within a story, and although the event was to help raise funds for Voices for Children, it must be noted that one of the band members was Aron Ralston, (who played the keyboard for the Rock Bottom Remainders)  the young montaineer who wrote a book which takes the reader through an excruciating tale of survival that became world-wide news in May 2003, when Ralston self-rescued himself after being trapped by a boulder in Blue John Canyon for five days, by amputating his own arm. He takes us, in his own beautiful prose, not only through the frank tale of saving his own life, but also the events in his past that made him the man he is today—a man that was strong enough to give himself the ultimate gift of a new life.

The event also included a live auction to raise additional funds for the "Voices for Children Foundation" and then more music by the Rock Bottom Remainders.

about voices for children foundation

Voices was founded in 1984 by three Juvenile Court Judges who were moved by the vulnerability of the abused and neglected children who entered their courtrooms. Realizing these children lacked even the most basic necessities, the judges organized a group of GAL volunteers to administer a small fund of paid fines and donations, which eventually became Voices For Children Foundation.

As a public/private partnership, Voices provides vital support to the GAL Program, enabling it to represent more children, while leveraging state support with donations from the private sector.

Voices For Children
The mission of Voices For Children Foundation
is to raise funds to ensure that every abused and neglected child in Miami-Dade County has a court-appointed Guardian Ad Litem volunteer and that financial assistance and other resources are available for their accompanying health, educational and social needs.

Guardian Ad Litem
The mission of the Guardian Ad Litem Program
is to advocate for the best interests of children who are allegedly abused, neglected or abandoned and who are involved in court proceedings.

By:  Ginny Fujino, with info from various websites