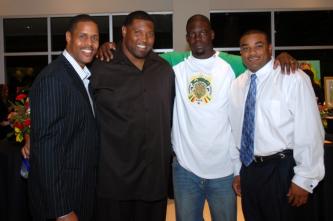 A variety of art and sports memorabelia were available for guests to bid on during the silent auction and a special "live auction", with sports celebrity guest auctioneer, Former Miami Dolphin Nat Moore, providing the incentive and inspiration to the guests to open their checkbooks and take out their credit cards for this worthy cause.  Items included two tickets for the 2007 Super Bowl to be played in Miami, Florida.

In attending this event, guests  will aid in the continuation of the Foundation’s mission of eradicating illiteracy among inner city youth.

You might want to call this event, "Art, Athletes and Automobiles", with the setting of the event taking place at Rick Case Luxe Collection where beautiful luxury cars were on display among the art and the music provided by jazz musician Jesse Jones, Jr. and his group of musicians.

Food was provided by local restaurants including, Outback Steakhouse of Davie, Anthony's Coal Fired Pizza, Dave and Buster's, Caroline Ale House, Schakolad and Azzurro Cafe Restorante Italiano and beer and wine to compliment the dishes served by the contributing restaurants.

Artist L.A. Charnack, could be seen doing a live painting demonstration at the event.  "Whether it be a sports action scene or a family portrait, the artist's mature insight brings each painting she does to a breath-taking conclusion."

Miami Dolphins linebacker, Twan Russell was concerned about the high illiteracy rate of inner city youth and the lack of educational reinforcement resources available to them. He and his mother, Mrs. Corliss Russell - a former educator, embarked on an awesome journey to eradicate illiteracy among high-risk groups. Together, they created the Russell Life Skills and Reading Foundation, Inc.

As a young man, Twan's dreams came to fruition because of his interest in books. Now, his focus is to pass on a legacy of reading to this generation of youth and increase their chances of becoming productive and successful citizens.  Having had to struggle and overcome his own adversity with reading, Twan decided to make a difference in the lives of at-risk elementary aged children faced with similar challenges. The Foundation currently serves more than 250 at risk youth in Broward and Miami-Dade Counties annually.

While attending St. Thomas Aquinas High School in Ft. Lauderdale, Florida, Twan achieved academic success and received athletic accolades.   Despite having to face numerous challenges, he was named to the academic honor roll countless times.  One of his proudest moments in high school was winning the State Track and Field Championship in the 300-meter hurdles.   Although track and field was his first love, Twan received a scholarship to play football at the University of Miami.

Some highlights of his college football success include: leading the University of Miami Hurricanes in tackles (115), posting 20 tackles against East Carolina University, earning Second Team Big East All American honors and being named Special Teams Captain.

After earning degrees in Broadcast Communications and Criminology at the University of Miami, the Washington Redskins selected Twan in the 1997 NFL Draft.  During his NFL career, Twan played the linebacker position with the Redskins, the Miami Dolphins and the Atlanta Falcons.

In light of an injury, Twan decided to retire from professional football in November 2004. Twan remains active in the community, making it a point to speak at functions and support causes that benefit those who are less fortunate. As a result of his contributions, he has been the recipient of numerous awards, including the Iron Arrow Award, the highest award attained at the University of Miami; the Winn Dixie Charities Good Citizenship Award; and community service recognition awards from the Boys and Girls Club and the Dolphin Foundation.