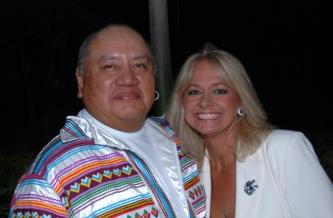 The Winterfest White Party, presented by Sara Lee and Publix at the Hyatt Regency Pier Sixty-Six Resort & Spa, was the setting of the recent Grand Marshal announcement. Surrounded in a spectrum of white, Seminole Tribe of Florida’s Hollywood Councilman Max Osceola, Jr. conveyed the anticipated news that hundreds had been waiting for. In celebration of the 35th Anniversary of Winterfest, this year’s Grand Marshal is “Jersey Boys” Frankie Valli.

The announcement came during this exclusive party, which kicked-off the season reflection of this year’s parade’s theme “Broadway on the Waterway.” This invitation only event was open for the first time to the general public winners of the Sara Lee “Party Like a Broadway Star” sweepstakes. This special event celebrating South Florida’s Holiday tradition, provided spectacular entertainment from Sixth Star Entertainment with a vignette of parades in the past.

A Panorama of Broadway themed illusions, fireworks and billowing white transformed the hotel’s newly redesigned Lanai Courtyard into a night of glimmer and glitz as local celebrities waited to hear the parade’s announcement.

3-D Pop Artist, Charles Fazzino, unveiled his poster art for this year’s Seminole Hard Rock Winterfest Boat Parade on stage and during the festivities autographed posters for the guests.

Also attending were Miss Florida USA Jenna Edwards and Gretchen Unger, Ms. Latina International.  Not to be outdone by the girls, the 2007 South Florida Firemen’s Calender men were on hand to sign their calendar and provide photo opportunities for the guests.

Media along with local and state representatives were also present for the first hand glimpse of this year’s parade highlights.

For more information on how to be a part of the celebrating 35th year of Holiday Magic with Winterfest, call 954-767-0686, or visit www.winterfestparade.com.