Where: The Westin Diplomat Golf Resort 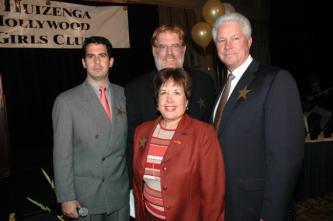 The 14th Annual "Hollywood Welcomes the Stars" event which benefits the Boys & Girls Club Marti Huizenga Unit was held at the Westin Diplomat Country Club, hosted by the Hollywood Police Department and was well attended by Sponsors, supporters and many celebrities.

The event featured many Silent Auction items that guests could bid on during the night's festivities was followed up by a rousing "Live Auction"!  100% of all proceeds will go to benefit the Marti Huizenga Boys & Girls Club, a non-profit private agency, "dedicated to helping young people improve their lives by building self-esteem and developing values and skills during their critical period of growth.  Serving more than 2,000 at-risk youth, ages 7-17, each year, its purpose is to inspire and enable children to realize their potential as productive, responsible and caring citizens."

Bill O'Reilly, of "The O'Reilly Factor" on Fox News Channel gave a wonderful tribute to The Marti Huizenga Boys and Girls Club, chosen as the #1 youth agency in the country three years in a row by The Chronicle of Philanthropy and one-of the best non-profit agencies in a study by Fortune 500.

Then each of the celebrities came up to accept a beautiful blue-glass token of appreciation from the Boys and Girls Club for their support.  After receiving their award, each celebrity gave a short speech on the special reasons for becoming involved with this organization.

Some Facts About The Marti Huizenga Boys & Girls Club:

Why the Boys and Girls Clubs of Broward County are important in preserving the future through prevention today.

EVERY DAY, THE BOYS AND GIRLS CLUBS OF BROWARD COUNTY MAKE A DIFFERENCE IN THOUSANDS OF CHILDREN'S LIVES.

That is why fundraisers are needed like the "Hollywood Welcomes the Stars" event, to help these kids and maybe change these statistics.