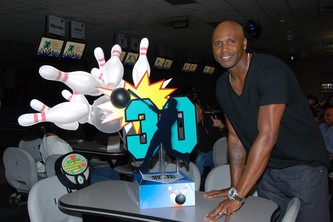 
Over 200 people with a host of celebrities came out for a fun Sunday afternoon at SpareZ Bowling Center in Davie including other former Marlins who were part of the team’s first World Series Championship.  Gary Sheffield, Luis Castillo, Charles Johnson and Edgar Renteria as well as several other former MLB and NFL players were rolling spares and strikes along with the guests as everyone celebrated 20 years of Marlins baseball.


Cliff Floyd thanked title sponsor Market America – Shop.com for their outstanding support.  Fox Sports Florida and Sports Radio 560 WQAM were both generous in promoting the event on air.  Joseph L. Kohn, Esq., the Loan Lawyer, stepped up to the plate with a silver sponsorship and was a generous bidder in the live auction to have dinner with Cliff and his baseball friends!


Cliff Floyd started his Foundation to help keep kids off the streets and encourage them to become productive citizens.  Although Cliff is originally from Chicago, he chose to “retire” to South Florida which became his home even when he was traded from the Marlins and played with other teams.  Cliff stated, “My first annual bowling tournament is a great start in supporting the goals of my foundation.  This is where my family lives, works and plays.  I have an opportunity to improve the quality of life here and the Market America – Shop.com First Annual Cliff Floyd Foundation Celebrity Bowling Tournament was a great start to support what I believe in.”  Cliff went on to thank his committee including Nancy Olson, Tashia Rahl, Craig Mish, Rob Socol, Lynne Goldberg, Paula Taylor, Beth Bryant and John Gullion as well at the student volunteers from NSU.


To learn more about the Cliff Floyd Foundation, go to www.cff30.com.