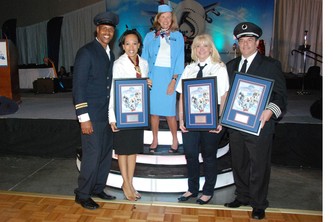 More than 550 guests, many dressed in garb reminiscent of the 1980’s movie, Airplane, entered a simulated hangar at the Broward County Convention Center on May 10 for the 18th Annual Broward Education Foundation’s Scholarship Celebration.  With the event theme “Soaring through the years as we celebrate 30 years of success” as the backdrop, more than $900,000 was raised to support student scholarships.


“We receive more than 1,000 applications each year from students needing financial assistance to pursue an education beyond high school,” said BEF President and CEO Jorene Jameson.  “Thanks to the generosity of our donors and community supporters, we will be able to accommodate more of those requests.”


This annual event raises scholarship dollars for deserving seniors who are graduating from Broward County Public Schools.  Last year, the event was the largest fundraiser of its kind in Broward County, raising more than $720,000. In 2012, BEF provided more than $1.1 million in scholarships to 180 graduates.


30th Anniversary Spokesperson Twan Russell and his wife, Lysandra, served as the Masters of Ceremony for the evening, while guests enjoyed entertainment by Six Star Entertainment.  Championship dance teams from Miramar High School and McArthur High School performed.  Robert and Diana Runcie and Laurie Rich and Neil Levinson were honorary chairs for the event.

.
Established in 1983, the non-profit Broward Education Foundation (BEF) seeks private contributions to supplement the public funding schools receive.  The Foundation raises support from the private sector and charitable foundations to provide scholarships to college- or trade school-bound high school graduates, who have exhausted all other sources of support; grants to support innovative curriculum in the classroom; and free school supplies to teachers in low income schools through the Tools for Schools Broward center in Pompano Beach.


BEF was ranked as the 10th best education foundation in the nation for its effectiveness in generating and sustaining financial resources and distributing funds to students in the district, according to a 2012 study conducted by the Dewey & Associates consulting firm.  During the 2011-12 fiscal year, the Foundation contributed more than $1.7 million in scholarships, school supplies, teacher grants and other school support.