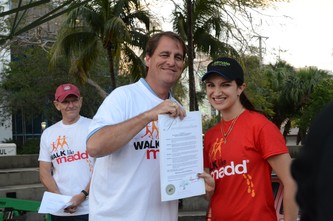 On Sunday, April 28, 2013, nearly 1,000 people walked and ran the 5k with one goal in mind - to end drunk and drugged driving in Broward County. The event has raised more than $76k. Donations are still being accepted at www.walklikemadd.org/fortlauderdale.