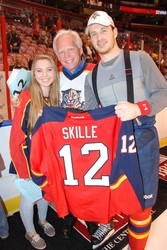 
Fans bid on game-worn jerseys from their favorite Panthers players to raise money on April 23 game.


The Florida Panthers Foundation announced they raised $22,000 going towards the fight against pediatric cancer through the annual Shirts Off Our Backs event held on April 23.

“We are thrilled that once again the annual Shirts Off Our Backs has raised $22,000 for pediatric cancer,” said Executive Director of the Panthers Foundation Andria Nolan. “The fans loved getting the chance to meet their favorite player while also raising money for a great cause.”

The event has fans bid on a player’s game-worn jersey with all of the proceeds going towards pediatric cancer initiatives. Fans that submitted the winning bid were able to meet the player following the game against the NY Rangers and received the autographed game-worn jersey.

The Florida Panthers Foundation was recently named the outstanding foundation in Broward County as part of the 25th Annual National Philanthropy Day Awards.

The mission of the Florida Panthers Foundation is to build a better future for the children of South Florida.  Through philanthropic partnerships, grants, donations and community outreach programs, the Foundation maintains a focus on children’s health, fitness, education and cultural needs.  During the 2010 season the Florida Panthers Foundation implemented the Panthers Pledge for Pediatric Cancer, which outlines our determined efforts to support children and families battling pediatric cancer. To learn more about the foundation and get involved please contact Andria Nolan, Executive Director at 954-835-7714.

Sunrise Sports & Entertainment is the premier company of its kind in South Florida. Florida Panthers social media is powered by Ford. Follow us on Twitter