Where: Museum of Discovery & Science 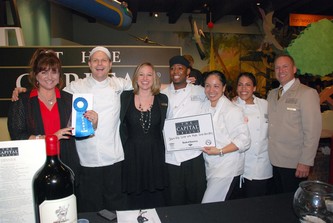 18th Annual Bank of America Wine, Spirits and Culinary Celebration, benefiting the Museum of Discovery and Science,
raised over $190,000


The Museum of Discovery and Science topped its own record in both attendance and net income at its 18th Annual Bank of America Wine, Spirits and Culinary Celebration on Friday, April 5, 2013. The event raised over $190,000 with proceeds benefiting the Museum.  Over 2,100 guests attended, about 100 more than last year.

Chaired by Kenneth Stiles, Matt Olsen and Dev Motwani, the event was made possible by the generosity of Bank of America and featured wine and spirits provided by Southern Wine & Spirits. Guests enjoyed tantalizing cuisine, music and a bountiful silent auction. The Silent Auction was chaired by Janet Buhl.

The Wine, Spirits and Culinary Celebration showcased a sequence of wine, spirits and craft brews with food pairings to more than 2,000 guests. It was the second year that spirits and craft beers were introduced. The highlights of the evening included tastings from 44 of South Florida’s leading restaurants, and a vast array of wines and spirits from around the world, courtesy of beverage sponsor Southern Wine and Spirits. The event also featured a silent auction, special presentations, and culinary and wine pairing seminars and a complimentary Riedel wine glass for every guest.

The evening started off with an exclusive VIP Martini Reception from 6:00 p.m. to 7:30 p.m. It concluded with the ultra chic Hilton Fort Lauderdale Beach Resort VIP “Candyland” Lounge where VIP guests were treated to sweet delights, wines and specialty drinks while dancing under the stars until 11:00 p.m.

Special features of the evening included a port wine tasting by Pandora Anwyl; a “molecular gastronomy” demonstration by A Thierry’s Catering, followed by a wine tasting with local radio personality and vinter, Paul Castronovo, who sampled wines from his own vineyard. THINK Magazine paparazzi were shooting the “chic-iest” for a feature in their next issue. Guests shared in the excitement of the event through social media by posting pictures of the event on Museum of Discovery and Science Facebook Page and Tweeting @MODSEVENTS and #MODSWFF.

This year’s “People’s Choice Awards” winners, voted on by attendees, were as follows: first place, for the third year in a row, went to Capital Grille for its Short Rib Slider with Maple Glazed Pork Belly; in second place for the second year was Hyatt Regency Pier Sixty-six, which served Coriander crusted Short Ribs and Laksa Glazed Lobster tail; and Grille 401’s took third place with a savory crab cake and Osaka style pressed sushi roll. Tastings from some of South Florida’s top restaurants included such longstanding participants as 3030 Ocean, A Thierry’s Catering and Event Design, The Ambry,

ABOUT THE MUSEUM OF DISCOVERY AND SCIENCE
The mission of the Museum of Discovery and Science is to provide experiential pathways to lifelong learning in science for children and adults through exhibits, programs and films. Founded in 1976 as The Discovery Center, the nonprofit facility serves approximately 450,000 visitors annually. Major operational support for the Museum is provided through generous support by Leadership Guild members including JM Family Enterprises, Inc., Wells Fargo, Patriot National Insurance, Broward Health and Sun Sentinel