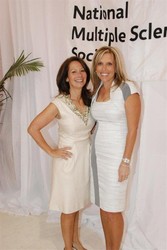 The MS Gala’s 30th anniversary celebration is taking off.  The annual luncheon was held Jan. 23rd at a lofty new location in 2013, the Sheltair airplane hangar. This hangar is home to South Florida’s sleekest private jets owned by some of the area’s business tycoons and social elite.

The MS Gala Luncheon has raised more than $5 million to help the National MS Society South Florida Chapter fund cutting-edge research, drive change through advocacy, facilitate professional education and provide programs and services designed for the 6,000 people with MS and their families.


This year’s honorees were Fred and Jodi Rothman and their daughters, Lecia and Alie.  The Rothmans, with a long-term commitment to philanthropy, learned firsthand about the concerns of MS when Alie was diagnosed with MS during her freshman year of high school. They are dedicated to finding a cure.


The family created a team for the MS Boca Walk raising over $650,000, and Fred became one of the top fundraisers in the country. Jodi now chairs the Boca Walk committee and Lecia created an interactive trivia game during the walk that is now implemented in all of the walks in South Florida. Alie started “the Alie Fund” for children with MS, which has raised almost $100,000 and is expanding nationally.


“This entire family is truly unique and humble in their steadfast approach to helping others,” said Karen Dresbach, President of the National MS Society, South Florida Chapter. “Their philanthropic efforts are a blessing to the entire South Florida Community and have made such an impact on the thousands of individuals living with MS.”


Carrie and David Schulman, principals of DBS Financial Group/MassMutual, served as title sponsor for the event.  The Schulmans have been involved with the Gala since its inception in 1983, providing continuous support.


Three-time event chair, Deborah DelPrete, presided over the even and was assisted by honorary chairs Monica Goldstein and Carrie Schulman.


Fashion designer Rene Ruiz presented his Spring/Summer 2013 collection.  His eye for high-quality fabrics and personalized attention to the creation and tailoring of each garment has created an international following for his luxurious, original, and sophisticated designs. He has a loyal following of many well-known celebrities such as: shoe designer Lisa Pliner, Real Housewives of Miami’s Lea Black and Alexia Echevarria, “Basketball Wives” Executive Producer Shaunie O’Neil and Univision anchorwoman and journalist Maria Elena Salinas. His men’s collection clientele includes singer Enrique Iglesias and famed trial lawyer Roy Black.  Rene’s designs have appeared in top fashion magazines including W and Vogue.


For further information about the MS Gala Luncheon, please contact Monica Whiting at the National MS Society, South Florida Chapter at 954-731-4224; 1-800 FIGHT MS; or visit  www.nmssfls.org.
###
About the National Multiple Sclerosis Society
MS stops people from moving. The National MS Society exists to make sure it doesn’t.   Annually alone, through its national office and 50-state network of chapters, the Society devoted over $132 million to programs that enhanced more than one million lives. To move us closer to a world free of MS, the Society also invested nearly $36 million to support 375 research projects around the world. The Society is dedicated to achieving a world free of MS. Join the movement at nationalMSsociety.org.

Early and ongoing treatment with an FDA-approved therapy can make a difference for people with multiple sclerosis. Learn about your options by talking to your health care professional and contacting the National MS Society at nationalMSsociety.org or 1-800-FIGHT-MS (344-4867).

About Multiple Sclerosis
Multiple sclerosis, an unpredictable, often disabling disease of the central nervous system, interrupts the flow of information within the brain, and between the brain and body. Symptoms range from numbness and tingling to blindness and paralysis. The progress, severity and specific symptoms of MS in any one person cannot yet be predicted, but advances in research and treatment are moving us closer to a world free of MS. Most people with MS are diagnosed between the ages of 20 and 50, with at least two to three times more women than men being diagnosed with the disease. MS affects more than 400,000 people in the U.S. and over 2.1 million worldwide.