Beneficiary: Symphony of the Americas 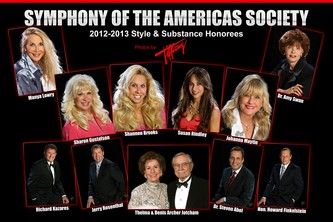 On November 27, 2012, the Symphony of the Americas Society hosted its annual Style & Substance Luncheon at the Hyatt Regency Pier Sixty Six, honoring prominent individuals who have distinguished themselves through outstanding service and commitment to our community. This exceptional group has reached out to touch the lives of untold numbers of people through their generous gifts of time, talent, and resources.

Sharon Gustafson and her daughters, Susan Rindley and Shannon Brooks, who demonstrate how the tradition of community service continues from generation to generation.


Dr. Stephen Abel the Assistant Dean for Extramural Affairs at Nova Southeastern University College of Dental Medicine Lauderdale, who has been instrumental in establishing a free dental clinic offering services to dozens of disadvantaged children at Women in Distress of Broward County.


Hon. Howard Finkelstein, the elected Public Defender of Broward County who presently has his own regular show on WSVN Channel 7 News called “Help Me Howard.”

Manya Lowry, who returned to the Fort Lauderdale area a short time ago, and has already become actively involved with The Royal Dames of Cancer Research, Museum of Discovery & Science, Cystic Fibrosis, 1000+ Club, Symphony of the Americas and numerous other area charities.

Johanna Maytin who has contributed much to the Fort Lauderdale community through the years. She has graciously supported worthy organizations such as Cystic Fibrosis, Pinion, and the 1000+ Club, among others.

Jerry Rosenthal, CEO of Tire Hut in Fort Lauderdale, is a major contributor to the Wines of the World Dinner & Auction benefiting the Symphony of the Americas and the Annual Cigar & Wine Dinner in support of Junior Achievement.

Dr. Amy Swan is a renowned forensic psychologist who helped establish legislation for victims of domestic and sexual violence. She has also worked as a pro bono Guardian Ad Litem in contentious divorce cases for the past nine years.

Thelma & Denis Archer Jotcham, longtime residents of Fort Lauderdale, have been actively involved in community service for many years and have a reputation as generous contributors to many organizations in Broward County.

Now in its 25th season, the Symphony of the Americas, Broward’s own professional orchestra, was recently designated as a Broward County Major Cultural Institution.  Since it was founded in 1987, the orchestra has brought the best of classical music to South Florida. Its focus is enriching the lives of the people it touches through the wonderful power of music.

For more information about the Symphony of the Americas, visit its website www.symphonyoftheamericas.org. or call 954-335-7002.