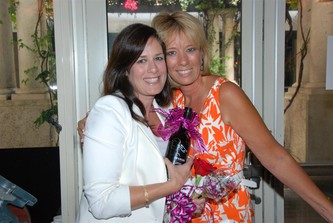 Pinion, inc spends their year having fun and raising funds for Special Olympics.

The June Social - aptly named " Heard it through the Grapevine"  - celebrated a very successful 2011/2012 year. The staff at Timpanos presented attendees with  Cham" Pinion" cocktails and Sangria which was  underwritten by Total Wine and  Santos Sangria .  The tables all dripped with grapes themed centerpieces donated by Fresh Point Produce, a long time supporter of Pinion.

The day wrapped up with an exciting live auction which featured " A Day with the BSO" and a VIP experience at the new Marilns Ballpark.  The end of the year event kicked off the new year's "fun" raising by bringing in over $5000 to Special Olympics.