Mistress of Ceremonies: Nila Do 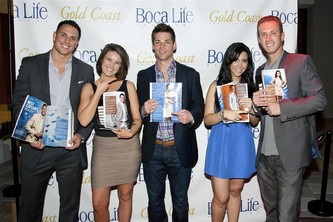 
These hip singles were featured in a seven-page fashion spread in the magazine, photographed by Jason Nuttle and set at B Ocean Fort Lauderdale hotel.


“I couldn’t imagine a more fun, exciting yet goal-oriented cast of six,” says Nila Do, managing editor of Gold Coast. “They not only deserve to be recognized for their dating eligibility, but also their characters and good natures.”


Vibe hosted the cocktail event, where each Best Catch was given a framed photo of themselves on the cover of Gold Coast.