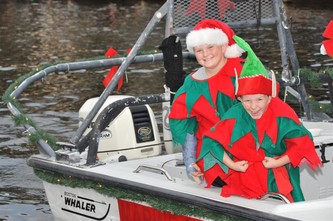 The Seminole Hard Rock Winterfest® Boat Parade announced Inside Edition’s Deborah Norville as the 2012 Grand Marshal. The primetime reporter will showcase South Florida by bringing her television show to this area during the Winterfest®  celebration.


After being honored at the Seminole Hard Rock Hotel & Casino Grand Marshal Reception presented by Patriot National Insurance Group on December 14, 2012, Deborah will prepare to lead the Seminole Hard Rock Winterfest® Boat Parade along the Fort Lauderdale waterways in true Grand Marshal style.  On the night of the Parade, she will be aboard the Grand Marshal Showboat (the Floridian Princess) powered by South Florida Ford waving to the one million spectators and millions more at home thanks to WSVN Channel 7 and Comcast television on the Nova Southeastern University Bow.


Veteran journalist Deborah Norville has been anchor of Inside Edition since March 1995.  Ratings jumped 15% the week the two-time Emmy®-award winner joined the series, which is now the nation’s top-rated syndicated newsmagazine. Deborah is also a best-selling author. It is her work in television that’s made Deborah a household name.  As anchor of Inside Edition, she has covered a wide variety of stories and events.  She broadcast from Washington DC hours after the terrorist attacks of September 11th,  was in Rome for the funeral of Pope John Paul II, anchored Inside Edition’s coverage of the funeral of President Ronald Reagan and the inauguration of President Barack Obama, and is regularly on the red carpet for Hollywood’s star-studded events including the Oscars and the Emmy Awards.


South Floridians know the holidays are here when the Seminole Hard Rock Winterfest® Boat Parade is on its way. The 2012 Parade was a festival of lights entertain with giant showboats, an 1812 replica of the tall ship – The Lynx, classic vessels such as Innisfail, Stargazer, Honey Fitz, Aurora II; private vessels, giant gator, and kayaks illuminated Fort Lauderdale’s waterway.  Embarking from the New River in downtown Fort Lauderdale and traveling north on the Intracoastal to Lake Santa Barbara in Pompano Beach, the Parade theme was “Musical Memories.” The 12-mile route of the “world’s most watched boat parade” featured embellished boats with highlights of musical milestones.