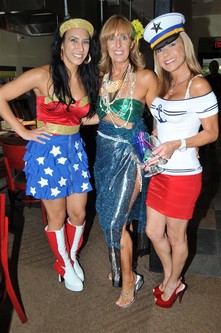 Fourteen amazing "celebrity chefs" sliced and diced, tossed shrimp tails and created smoking volcanos from onions, as judges observed their skills and determined the winners of the coveted awards.

Other Table Sponsors and Celebrity Chefs;

Celebrity Chefs were assisted by the amazing chefs from Benihanas, helping them to develop their skills.  Rock Saki was the special drink at the tables, and Celebrity Chefs worked hard for tips, all for a good cause.