What: Local Chefs Serve up Delicious Event to Save Babies 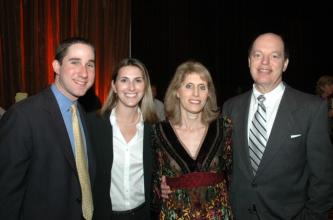 The evening began with "tasting and sipping" to the sounds of Davis & Dow.  While the guests feasted on the scrumptuous food prepared by Chefs from the area's top restaurants and tasted the fine wines, they could also browse through the ballroom and bid on the many silent auction items on display.

Aden Jamal and his wife Soray Jamal talked to the guests about the birth of their twins, who were born premature and gave thanks for the help that the March of Dimes organizaton fund raising efforts that contribute to the continued research, that made it possible to save one of their twins.  The survivng twin, Aden is now a healthy, growing boy whom his parents are very proud of. According to Aden Sr., his wife Soray, has been a supporter of the March of Dimes since she was a child herself.

Wes Welker and Auctioneer Jeff Martin, played a game with the audiance, kind of a "last man standing", which offered the winner a special prize for participating. Then Jeff conducted the live auction.

The March of Dimes is a national voluntary health agency whose mission is to improve the health of babies by preventing birth defects, premature birth, and infant mortality.  Founded in 1938, the March of Dimes funds programs of research, community services, education and advocacy to save babies and in 2003 launched a campaign to address the increasing rate of premature birth.

The March of Dimes mission can continue, thanks to the support of the guests tonight and the communities continued support year-a-around.