What: Screening of Pirates of the Caribbean: On Stranger Tides 3D

Where: Museum of Discovery and Science 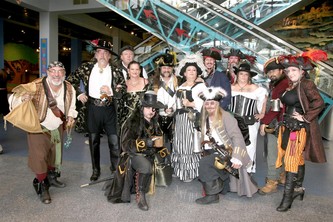 at Museum of Discovery and Science.

Fort Lauderdale, FL – June 4, 2011 – Friends of MODS recently closed their year with "Captain Jack's Booty Call" cocktail party held at Museum of Discovery and Science on May 20, 2011. The party was followed by an opening night screening of Pirates of the Caribbean: On Stranger Tides 3D at the AutoNation® IMAX Theater. Over one hundred guests attended the party, networking and toasting to both past and future success.

Friends of MODS President, Janet Buhl, welcomed guests and graciously presented an $11,000 check to Museum of Discovery and Science’s Executive V.P. of Development, Patrick Flynn. While this event marked the wrap-up of a successful year for the auxiliary, Friends of MODS will be back in the fall with an even more exciting lineup of events benefiting the museum.

ABOUT FRIENDS OF MODS

Friends of MODS is an auxiliary organization formed by a group of community-minded, fun-loving women. The mission of Friends of MODS is to provide the Museum of Discovery and Science with financial support, volunteer service and community awareness. We encourage members to take a hands-on role in the Museum through participation in fundraising events, volunteer opportunities and by serving as goodwill ambassadors throughout the community.

ABOUT THE MUSEUM OF DISCOVERY AND SCIENCE

The mission of the Museum of Discovery and Science is to provide experiential pathways to lifelong learning in science for children and adults through exhibits, programs and films. Founded in 1976 as The Discovery Center, the nonprofit facility serves approximately 450,000 visitors annually.  Major operational support for the Museum is provided through generous support by Leadership Guild members including: JM Family Enterprises, Inc., Broward Health, Sun-Sentinel and Wachovia.

The Museum is open seven days a week, 365 days a year; Monday through Saturday from 10 a.m. to 5 p.m., and Sunday from noon to 6 p.m. with extended IMAX® hours on most evenings. General Admission prices are $16 for adults; $15 for seniors; $12 for children 2 to 12. Children under 2 are free. A General Admission Ticket includes admission to the Museum exhibits and one 45-minute IMAXÒ film. The Museum of Discovery and Science is located downtown at 401 SW Second Street, Fort Lauderdale, Florida 33312.  For more information about the Museum, visitors should call 954.467.MODS (6637) or visit our web site at www.mods.org

ABOUT THE AUTONATION® IMAXÒ THEATER

The IMAXÒ projector’s 15,000 watt Xenon bulb projects images of unsurpassed brilliance and clarity onto the five-story-high screen. Both 2D and 3D films are shown in the theater. 3D films are viewed using our lightweight XR 3D glasses, the latest technology in 3D film viewing. The IMAXÒ experience is an unparalleled fusion of sight and sound. For show times, call 954.463.IMAX (4629) or visit www.mods.org