Music: provided by "In The Mix" 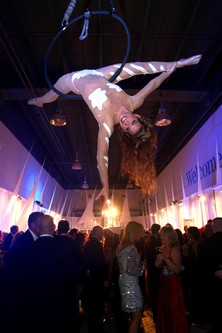 to benefit the Museum of Discovery and Science.

Kim L. Cavendish, president and chief executive officer of the Museum of Discovery and Science, announced today that the Mercedes-Benz Fort Lauderdale Casino Royale Gala held on October 23, 2010 raised nearly $300,000 to benefit the Museum. Cavendish said, “We are so grateful that the community continues to support the Museum and its mission so generously.”
Since construction of the Museum’s new EcoDiscovery Center wing prevented the Museum from hosting this year’s gala onsite, longtime Museum sponsor Mercedes-Benz Fort Lauderdale graciously hosted the event in their elegant showroom, which was transformed into an elegant James Bond-style casino. The location certainly added to the theme and gave guests a thrilling James Bond/007 experience.
During the event, the Museum of Discovery and Science honored local business leader Mike Jackson, chairman and chief executive officer of AutoNation, with The Community Leadership Award for his leadership and generosity to the Museum and throughout the community. Headquartered in Fort Lauderdale, AutoNation is the industry leader throughout the country, whose name we proudly carry on the IMAX® Theater. AutoNation donated the lead gift of $3 million for the Museum’s current expansion project and has sponsored numerous films and events since 1996.
Nearly 500 guests reveled in an elegant evening of fine dining, dancing and Las Vegas Style casino games. The evening commenced with the Wachovia Shaken, Not Stirred cocktail reception with Southern Wine & Spirits as the exclusive beverage sponsor. A Champagne Angel suspended from the ceiling poured champagne into guests glasses which created a spectacular 007 greeting. Thierry’s Catering impressed guests with scrumptious hors d’oeuvres and a remarkable menu. The event included both silent and live auctions that featured first-class prizes including: a Mercedes-Benz E550 Coupe, a cruise in the Galapagos Islands, and a trip to Paris just to name a few.
The emcee for this year’s gala was sports director and anchor Steve Shapiro of WSVN Channel 7. The Casino Royale Gala co-chairs included: Mercedes-Benz Fort Lauderdale general manager Tony Giordano, AutoNation vice president of corporate affairs Gale Butler, and Museum trustee and partner at Crowe Horwath Timothy Iszler and wife Elizabeth.
ABOUT THE MUSEUM OF DISCOVERY AND SCIENCE
The mission of the Museum of Discovery and Science is to provide experiential pathways to lifelong learning in science for children and adults through exhibits, programs and films. Founded in 1976 as The Discovery Center, the nonprofit facility serves approximately 450,000 visitors annually. Major operational support for the Museum is provided through generous support by Leadership Guild members including: Broward Health, JM Family Enterprises, Inc., Sun-Sentinel and Wachovia.
The Museum is open seven days a week, 365 days a year; Monday through Saturday from 10 a.m. to 5 p.m., and Sunday from noon to 6 p.m. with extended IMAX® hours on most evenings. General Admission prices are $16 for adults; $15 for seniors; $12 for children 2 to 12. Children under 2 are free. A General Admission Ticket includes admission to the Museum exhibits and one 45-minute IMAXÒ film. The Museum of Discovery and Science is located downtown at 401 SW Second Street, Fort Lauderdale, Florida 33312. For more information about the Museum, visitors should call 954.467.MODS (6637) or visit our web site at www.mods.org
ABOUT AUTONATION
AutoNation, Inc., headquartered in Fort Lauderdale, is America's largest automotive retailer and has been named America's Most Admired Automotive Retailer by FORTUNE Magazine five times. A component of the Standard and Poor's 500 Index, AutoNation, Inc. owns and operates 249 vehicle franchises in 15 states.
See More Past Events
Forgot Password?