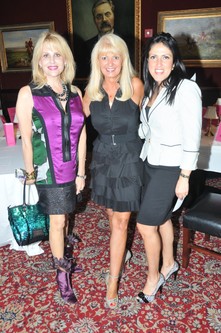 PINION Takes On SEX AND THE CITY

PINION's season kick off luncheon was a huge success generating more than $7000 for Special Olympics Broward Countyand it's Athletes.

Look out Carrie Bradshaw, the girls of PINION certainly know how to glam it up for a good cause.

Guests came out in their hottest styles to begin the fun @ Capital Grill and kickoff the fundraising season.