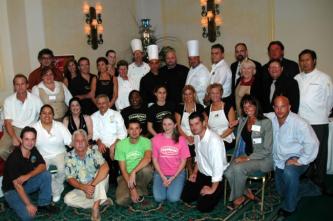 The "Chocolate Chefs" provide a "Chocolate Fantasy" for Kids In Distress

The first annual “Chocolate Fantasy”, sponsored by Levinson Jewelers and Ft. Lauderdale Grand Hotel & Yacht Club will definitely become an event everyone will look forward to in future years. Emcee/Auctioneer Mark Schumacher WPLG-TV Local 10 stated, "This is one of the best premiere events I have had the privilege of being a part of."

Highlight of the live auction led by Mark Schumacher, WPLG Local 10 News was a special one-of-a-kind $10,000 chocolate & white diamond bracelet donated to Kids In Distress by Levinson Jewelers, one of Florida's premiere jewelers.  Other items in the live auction included heartwarming items made by children for children including a wall hanging and a special picture were also featured in the live auction.

“The Chocolate Fantasy was a fun venue with a serious purpose.  The presence of the guests at the event made them a part of a larger fantasy – to make the lives of children better."