What: Hosted by SIX DEGREES -“Through the Lens of a Fan,” Dolphins CEO Mike Dee 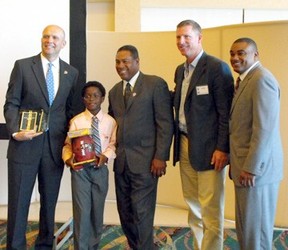 “Through the Lens of a Fan,” Dolphins CEO Mike Dee To Speak On His Career In Sports
Creating Success Out of Challenges and Opportunities
Nearly one year after his launch into the NFL, Miami Dolphins CEO Mike Dee will shared his journey to the one job he said could tear him away from Fenway Park and the Boston Red Sox. Since the beginning of his career in sports – from connecting a community through baseball to strengthening franchise legacies – Dee has used his business and marketing prowess to inspire passion and create success.
On Tuesday, April 20, Dee engaged a select group of South Florida sports fans and community leaders at Sun Life Stadium. The event, rans from 7:30-9:00am, was a “Bigwig Breakfast” hosted by Six Degrees, the professional networking arm of Big Brothers Big Sisters of Broward County, and an energized group of volunteers, supporters and professionals who believe in the mission of the nonprofit.
A Six Degrees Bigwig event gives members and guests a unique opportunity to hear some of South Florida’s most prominent and well-respected business leaders discuss their personal and professional journey and successes. The Bigwig event series has hosted industry trailblazers such as Mike Jackson of AutoNation, Inc., Jordan Zimmerman of Zimmerman Advertising, the Capo brothers of El Dorado Furniture, and Dr. Myles Martel, personal debate advisor to President Ronald Reagan.
“Speakers are selected not only by their unparalleled leadership in their respective fields, but also for their connection to the community and passion for giving back,” said Big Brothers Big Sisters of Broward County CEO Ana Cedeño. “We are thrilled to have Mike Dee as a Bigwig. His drive to further the Miami Dolphins’ long-time commitment to youth and the South Florida community resonates with Big Brothers Big Sisters’ daily mission.”
Dee was named as chief executive officer of the Miami Dolphins and Sun Life Stadium by Stephen M. Ross on May 3, 2009. In this capacity, Dee oversees all aspects of the franchise’s non-football operations and leads both organizations through the new era of Dolphins ownership. He came to South Florida after a distinguished 15-year career in Major League Baseball, where he played a lead role in the resurgence of the San Diego Padres and Boston Red Sox, and was a member of two World Series Championship teams.
Upon the announcement that Dee would be transitioning to the Dolphins, his mentor, Red Sox President and CEO Larry Lucchino said, “He is one of the most creative, versatile and energetic executives in all of sports. The Miami Dolphins could not have selected a better person for the challenges and opportunities that lie ahead of them."
All of the funds raised through Six Degrees go directly to support Big Brothers Big Sisters of Broward County, a donor-driven, volunteer-supported organization that changes the lives of children, teens and young adults. By fostering one-to-one mentoring relationships for at risk youth, Big Brothers Big Sisters of Broward County increases their odds of succeeding in school, behaving nonviolently, avoiding drugs and alcohol and breaking negative cycles. Studies show that adults mentored as children through Big Brothers Big Sisters are more likely than their peers to earn a four-year college degree and household incomes of $75,000 or greater, take part in strong personal relationships and volunteer in the community. Learn more at www.bbbsbroward.org.
###
See More Past Events
Forgot Password?