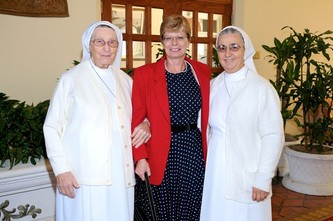 As always, the Marian Center Auxiliary’s Annual Luncheon was an emotional see-saw with emotions ranging from joy and happiness to compassion-- and in general a real feel-good feeling when you left. Held at the Surf Club, the day began with a cocktail hour, where vendors sold a variety of beautiful items with a portion of the proceeds going to the charity. The more than 250 guests were then ushered into the main dining room for the luncheon, a fashion show courtesy of Charli Girls and some wonderful and heart-warming presentations.
The Marian Center provides educational, residential, vocational and recreational services to over 150 students and adults, ranging in age from six years old through middle adulthood, with developmental disabilities. One of the highlights of the afternoon was when the Bell Choir, a group of teens and adults who attend the Marian Center performed four songs--among them Somewhere Over the Rainbow and Climb Every Mountain. The group received a standing ovation after the performance and there wasn’t a dry eye in the room. Mothers of children who attend the school told stories about the miracles that were performed there, including Melanie Gomez, Director of Development, who was told that her son would never walk or talk, and due to the Marian Center he does both now.
An added bonus was a surprise birthday cake presented to Sister Lucia Ceccotti, Director Emeritus, who turns 90 in May. She is one of eleven sisters who came from Italy in 1963 and founded the school, and Sister Carla who also celebrates her birthday in May. The winner of the Frank Crippen Memorial Award for $2500 was announced at the luncheon.
The fashion show by Charli Girls was next and it was an amazing array of black and white clothing accessorized with scarves and jewelry that were real show stoppers. The Charli Girls collection includes a versatile range of luxury jersey, using the finest yarns to create flowing and sophisticated jersey separates and although it is new to south Florida, has a cult following in London.
Board members included: Toni Acocella, Terry Azrack, Jan Brandon, Marilyn Charles, Eileen Coleman, Dottie Crippen, Gail Del Vecchio, Jeanne Del Vecchio, Maria Farrey, Paige Farrey, Donna Gregory, Andrea Hellman, Mary Ann Kerr, Martin Neca Logan, Ana Marmol, Denise Santa Cruz, Judith Tierney Sherry, Andrea Puleo, and Kathleen Vazquez.
At the close of the event, door prizes and raffles were selected and there were so many prizes that most of the attendees left with a gift when they exited. Of course the best thing they left with was that feeling of well-being when you know that you have helped those in need by your generosity.
See More Past Events
Forgot Password?