February 25, 2010 - Voices For Children Foundation "BE A VOICE FEEL "THE MAGIC GALA" 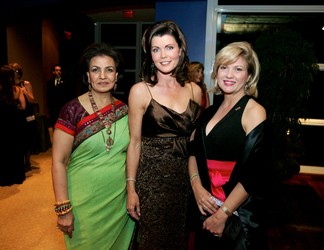 COMMUNITY ANGELS STEP UP AT THE VOICES FOR CHILDREN FOUNDATION
BE A VOICE FEEL THE MAGIC GALA
(Miami, FL. February 2010) Be A Voice Feel The Magic Gala benefittingVoices For Children Foundation-the fundraising arm of the 11th Judicial Circuit Guardian Ad Litem Program-was a tremendous success. The magical evening began at 7:30 p.m. with cocktails and a fabulous silent auction, followed by a sumptuous dinner at 9:00 p.m. and dancing to the music of celebrity DJ Kucha, who has appeared on CNN and MTV.  South Florida’s own Channel 10 News Anchor, Laurie Jennings, served as the evening’s Mistress of Ceremony. Performers from Cirque Du Soleil amazed the audience with high flying silk acrobatics and hand-to-hand balancing acts.
A pivotal moment of the evening was a moving testimonial by two sisters, Olinda and Carol.  They told their heartbreaking story of hardship, abuse and sadness, but thanks to their Guardian Ad Litem advocate, they are succeeding. The testimonial brought the entire room to tears. Veena Panjabi and Aimee Owens, co-chairs for the evening said,” The testimonial we just heard is the unfortunate story of one of so many children in our community.  It is only through the generous support of our friends, contributors, and volunteers, that this vicious cycle of abuse and abandonment will stop and children can have bright futures.”
As a result of the testimonial, so many of the guests stepped up and pledged much needed funds for Voices for Children, 28 Angels in total made substantial contributions.  Upon making the contribution guests were entered to win a $5,000 shopping spree at Neiman Marcus Coral Gables.  The winner surprised everyone, as she gifted Olinda and Carol the shopping spree. Many other guests in the audience stepped up and pledged to help, including covering the last year of tuition at FIU for the older sister, to helping both of sisters find a job, to free shoes. Nelson Hincapie, President and CEO of Voices For Children said, “Tonight is all about giving a voice to Miami-Dade’s abused, abandoned and neglected children and we are grateful for everyone’s support, generosity and commitment to our children.”
The Be A Voice Feel The Magic Gala was sponsored by Mandarin Oriental, Miami; Southern Wine & Spirits of South Florida; Cathay Pacific Airways; Jeff and Yolanda Berkowitz; The Continental Group; Florida Power and Light; Ramesh and Veena Panjabi; Michael and Diane Rosenberg; Stearns Weaver Miller Weisller Alhadeff & Sitterson, P.A. and Swire Properties.
In attendance was: Pulitzer Prize winning author and Miami Herald columnist Dave Barry, the honorable mayor Tomas Regalado, Philanthropists and Designers Lisa and Donald Pliner, Commissioners Carlos Gimenez, and Sally Heyman, Judges Cindy Lederman and Jeri Cohen of the 11th judicial circuit court, Claudia Puig,  Senior Vice President/Eastern Regional Manager, Puerto Rico, Miami, New York for Univision Radio, The Honorable Alan Gold, U.S. District Court for the Southern District of Florida, Yolanda and Jeff Berkowitz, Beth Tasca, Veena and Ramesh Panjabi, Aimee and Stephen Owens.
###
Voices For Children Foundation is a not for profit organization that raises funds to ensure that every abused, abandoned and neglected child in Miami-Dade County has a court appointed Guardian Ad Litem and that financial assistance and other resources are available for their accompanying health, educational, and social needs. Guardians Ad Litem are trained, court-appointed adults who serve as the representative voice for abused, abandoned, and neglected children involved in dependency court proceedings.  Be a Voice, visit www.voices4.org.
See More Past Events
Forgot Password?