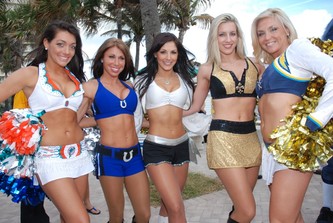 SoJo Event Management, in conjunction with the National Football Leagues' Miami Dolphin Cheerleaders held " of the Beauties" on Friday, January 29, 2010.

" of the Beauties is more than just an event to us, it is a way for us to showcase the athletic abilities of these talented women from across the League," said Emily Newton, Miami Dolphins Cheerleader Coordinator.  "We knew this event would be the besgt way for the Cheerleaders from around the League to show Suth , and the visiting fans just how tough and competitive they are. Plus, the women who participated in the event before enjoyed themselves and the family-friendly atmosphere that Soulon has created."

of the Beauties for 2010, reatured 26 NFL Pro Bowl cheerleaders in the AFC vs NFC athletic competition.  The two teams competed in tug-of-war, beach volleyball, flag football, and an obstacle course created by the Miami-Dade and Broward county Fire Departments.  In addition, the cheerleaders performed two dance routines.  As an added feature, AFC and NFC cheerleaders also signed autographs and took pictures with fans.  Several current and former  NFL Players also served as celebrity judges, emcees, referees and much more.  Mascots from NFL teams also participated in various aspects of the competition and were on hand for pictures with the children.