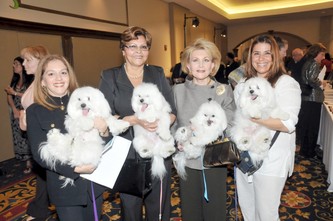 This fundraiser for the Humane Society of Greater Miami-Adopt-A-Pet, chaired by Pat and Milton Wallace and held at Jungle Island has to be seen to be believed

MIAMI, FL—Pawpurrazzi is nothing like any other charity event in town. Where else do you see 500 of the leading people in town with more than 350 dogs, all dressed to the nines, gather together to enjoy an all-American down home but very elegant party? The answer: Nowhere in the country. Pat and Milton Wallace, the bone-a-fide chair people for the second year pulled off a miracle by making sure that all two and four legged guests had a wonderful time at Pawpurrazzi 2010. No stone was left unturned and everyone’s needs were catered to. The best part is that the event raised approximately $500,000 and five dogs were adopted that evening.

People and dog watching is the ultimate activity here. Dogs were treated to ice cream, make-overs, a Purina doggy bar and more, while their owners munched on an array of comfort type hor’s d’ouevres—the sliders, hot dogs, sweet potato French fries and small cups of tomato and broccoli soup were mmm mmm good and a yummy treat-- and cocktails, while mingling with other guests and bidding on items from the silent auction. The impressive auction was chaired by Juan Lopez, Vice President and General Manager of Saks Dadeland, Marisa Cisneros and Ann Rubino, three people who know luxury.

After cocktails, the guests moved into Jungle Islands Treetop Ballroom, fabulously designed by Karla Conceptual Experiences, and enjoyed a sit down dinner and a fantasy come true dessert buffet of sundaes, smores, brownies, cupcakes, cookies, and every scrumptious thing you can think of that is not on your diet. There they were treated to the highlight of Pawpurrazzi 2010, “Great Pets Who Walk In Front of Great People” show where honored guests and their dog(s) were featured on the runway. This part was hosted by CBS4 anchor Cynthia Demos. Then when you just couldn’t imagine the evening getting any better, members of University of Miami Theatre Arts Department performed songs from the musical CATS.

Top Dogs and Honorees, The Batchelor Foundation represented by Sandy, Jon, and Nancy Batchelor received special acknowledgement because of its generous contribution to the event. Kirk Landon and Pamela Garrison were applauded for being the first Pawpurrazzi founder-inductees in the Hall of Fame. Their generous support has been invaluable to our success and we thank them from the bottom of our hearts, said Pat during her welcoming speech. Special thanks were given to corporate sponsor South Motors and their mascot Luky Dascal. Guests who were singled out for their commitment to the organization included Bunny Bastian, and Marisa Cisneros-Rizzon, who were the Humane-itarian and Best of Breed. Animal Ambassadors and Star Dogs included Dr. Fredric Brandt, Yvonne Eldredge and Emily Damiano, Barbara and F.W. Mort Guilford, Sherrill and Mary Ann Hudson, and Linda and Patrick McEnany.

The Humane Society of Greater Miami is dedicated to placing every dog and cat into a loving home, and to promoting responsible pet ownership and spay/neuter programs.

For further information please contact Laurie Hoffman at 305-749-1815 or online at laurie@humanesocietymiami.org