Where: Gryphon Nightclub in Seminole Paradise at the Hard Rock Hotel & Casino

Special Thanks: To Broward WishMakers for donating their talents and time to organize this event! 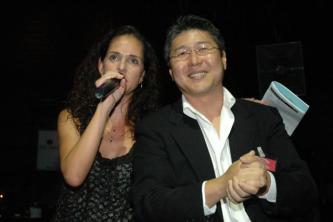 The 8th Annual Bachelor/Bachelorette Auction, held at the Gryphon Nightclub in Seminole Paradise at the Hard Rock Hotel & Casino Hollywood, offered an opportunity to bid on extravagant date packages with nineteen of South Florida’s hottest and most eligible singles while raising money to grant the wishes of local children who have life-threatening medical conditions.  The event also featured raffle prizes, food, and drinks.

Hosted by Coast 97.3FM  Julie Guy & Gnarly Charlie, the exciting event started with guests mingling and enjoying the Gryphon Nightclub’s libations.  Premier Beverage Company, Dewars 12, Bacardi and Michelob Ultra sponsored liquor for the event. The auction, presented by FORCE Flooring Services Inc. and the Broward WishMakers®, was attended by over 500 guests.  Broward WishMakers is a group of business professionals who raise funds and awareness for the Make-A-Wish Foundation through community events. .

Guests entered the Gryphon Nightclub and spent the first 45 minutes mixing and meeting the bachelors and bachelorettes. At 7:30, Julie Guy and Gnarly Charlie introduced the ladies and gentleman as they took the “runway” to whet the bidder’s appetites.  As soon as the introductions were over, the bidding started.  Not surprisingly Julie Guy emceed for the men and Gnarly Charlie emceed for the ladies.  The first guy up for bid was Kip.  A brave soul to go first and to be teased for his “vague”, according to Host Julie Guy, job title of Account Manager.

The other 18, bachelor and bacheorettes were also teased good-naturedly by the emcees.  It was a fun and worthwhile event.  Some of the auctioned gals and guys added to the enjoyment by their comments.  Laurie said her best feature was her

“round booty”.  Her winning bidder was going to be treated to a Chris Isaac concert along with her winning personality and charm.

All 19 Bachelors and Bachelorettes were charming, good natured and fun.  Guests enjoyed a fun evening and the gracious bacheclors and bachelorettes made the evening a real success.  Over $65,000 was raised thanks to the efforts of generous donors, bidders, volunteers and participants.  Special recognition is given to FORCE Flooring for presenting this event and to the Broward WishMakers for their time and talents in organizing this event.

100% of the event proceeds donated to the Make-A-Wish Foundation of Southern Florida so that it can continue to grant the wishes of children who have life-threatening medical conditions.  A wish fulfilled enriches the human experience with hope, strength, and joy, something the Southern Florida chapter has accomplished more than 5,600 times in its 23-year history.  The nonprofit organization depends on fundraisers and donations from the community to enable it to serve children and families in Broward, Collier, Glades, Hendry, Lee, Martin, Miami-Dade, Monroe, and Palm Beach counties.