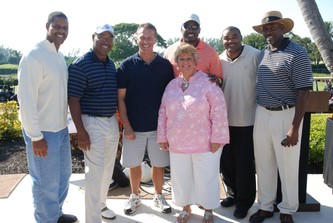 Participants received premium goody bags, and the opportunity to win amazing hole-in-one prizes - Two Hummers donated by Coral Cadillac HUMMER.  Throughout the course players qunched their thirst at on the the many refreshment stations that offered Bloody Marys, Coca-Cola, Budweiser and Michelob Ultra.

In addition tennis was part of the days events with a round robin format and Southern Wine and Spirits Mimosas oar Bloody Marys at the reception station at the tennis courts.