What: Jim Belushi is welcomed by fans, dignitaries from Broward County and the City of Ft Lauderdale 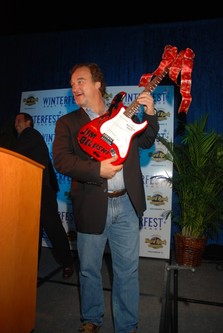 ALL EVENTS LEAD TO THE ULTIMATE PARTY -

Jim Belushi was introduced as the 2008 Winterfest Boat Parade's Grand Marshal at a reception held at the Seminole Hard Rock Hotel and Casino.

Welcoming Jim as the Grand Marshall with a Key to the City of Ft. Lauderdale was Mayor Naugle, A key to Broward County by Mayor Stacy Ritter  an official Seminole Hard Rock guitar presented by Max Osceola, memoriabelia from NOVA University presented by Dave Dawson, and other gifts from sponsors including cufflinks from Edify and a special Brick from Riverwalk Inc, for the Riverwalk Celebrity Walk of Fame on the staging area of the Parade.

Also recognized was Lesley Visser, the first woman to be recognized by the Pro Football Hall of Fame as the 2006 recipient of the Pete Rozelle Radio-Television Award which recognizes long-time exceptional contributions to radio and television in professional football. Pro Football Hall of Famer Troy Aikman said about Visser in his 2006 induction speech, "She brought respect and professionalism to the field of journalism for her work in print and broadcasting. It makes me proud to be in her company today."  Leslie was also presented with a special Brick from Riverwalk, Inc.

Immediately after his welcome as the Grand Marshall, Jim Belushi performed with his band Sacred Hearts at Hard Rock Live.