Where: The Coconut Grove Convention Center

Entertainment: Jerry Rivera, one the most popular salseros of the new generation, Mexican pop singer and member of the Crescent Moon Records family, Jimena, as well as Carlos Oliva y Los Sobrinos del Juez, who have won multiple awards for their senuous Caribbean beats and cration of several musical themes for various television shows.

Of note: This will be the last event held at the Coconut Grove Convention Center, catering to 3,000 of South Florida's most influential residents. 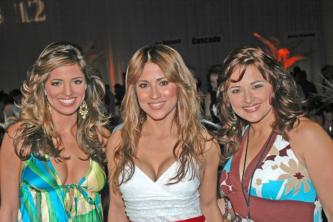 It was a quiet night in Coconut Grove, until you stepped into the Coconut Grove Convention Center for the 15th Anniversary Amigos For Kids celebration with great food, lively music, dance performances and entertainment by Hot Jams Entertainment, Latin Fever Entertainment, Jimena, Melecumbre-Afro-Venezuelan Music, The Salsa Kings, Belly dancing by Virginia.

The Dewar’s 12 Girls who were serving up a special martini in a special Dewar’s Glass greeted guests.  Lighting effects and flat screen TV’s gave thanks to the many sponsors of this fantastic event in South Miami and hundreds of Silent Auction items waited for the highest bidder to claim their prize.

The music and dancing never stopped and the food, from the paellas to the deserts provided by various restaurants in the South Miami area and beverages provided by Dewar's 12 were both in abundance and served by smiling staff, eager to please the thousands of participating guests.

Amigo’s for Kids, their Board of Directors, Staff and guests enjoyed their night from the second they stepped in to the beautifully decorated hall to the last domino laid down.

The curtains parted at 10:00 PM to reveal hundreds of domino tables, a huge dance floor, music by Carlos Oliva Y Los Sobrinos Del Juez and a special anniversary performance by one of the most popular salseros, Jerry Rivera.  Everyone was eager to begin play and show his or her cunning, skill and knowledge of Domino's.  It was hard to decide though, "Dominos or Dance?"

Domino's 06 was a total success!