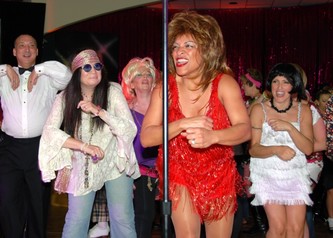 Big Wheel Keeps on Turning for Big Brothers Big Sisters As 5th Annual Déjà Vu Contributions Total $286,000
FORT LAUDERDALE, FL – October 22, 2008 – Déjà Vu Ball, a retro-themed, all-night celebration benefiting Big Brothers Big Sisters of Broward County was held on Saturday, October 18, and for the fifth year, continued to be the non-profit’s largest annual fundraiser as contributions “topped the charts” at $286,000. Sixth Star Entertainment and Marketing produced the event and catapulted guests and the entire second floor of the Bahia Mar Beach Resort back in time to the 1950s-1980s with costumes, decorations, music and live entertainment.
This year’s theme, The Beat Goes On, commemorated the agency’s 35 years of professionally supported, one-to-one mentoring and its perpetual goal to continue to serve the children of Broward County. Thanks to the night’s sponsors donating in-kind services, only 9% of the dollars raised went to the cost of the event, leaving nearly 91% going directly toward providing a mentor and friend to many of the more than 700 children currently on Broward County’s waiting list.
“Given today’s economy, we feel so blessed and grateful that the community continues to support us and recognizes the importance of providing a mentor for every child who needs or wants and changing the way our children grow up today,” said CEO Ana Cedeño.
At the center of the sold-out event was the honoring of selected child advocates in Broward County, who received the title of “lead vocalists.” This year’s honorees were: H. Gary Correll of Publix Supermarkets and Jorge Garrido and Shawn Wooden of Garrido & Wooden Financial Strategies. All honorees were featured individually during the evening and awarded gold records for their positive impact in our community.
The night’s festivities also included specialty cocktails, an extensive silent auction, live music, dinner, dancing and a secret headline performer who flew in from Las Vegas for one night only, Tina Turner.
Big Brothers Big Sisters thanks: Sixth Star Entertainment & Marketing, Bahia Mar Beach Resort, Bank of America, Comcast, JM Family Enterprises, DHL, Garrido & Wooden Financial Strategies, Rothstein Rosenfeldt Adler Attorneys at Law, the Sun-Sentinel and everyone who made the evening possible. Next year’s event is tentatively scheduled for October, 2009. For more information on Déjà Vu Ball, call (954) 584-9990 or email dejavu@bbbsbroward.org.
Big Brothers Big Sisters is the oldest, largest, and most effective youth mentoring organization in the United States. It helps children reach their potential through one to one relationships, professionally supported, with measurable results.  The organization serves 225,000 children, ages 6 through 18, in all 50 states. National research has shown that the positive relationships between youth and their Big Brothers and Big Sisters have a direct, measurable, and lasting impact on children’s lives. Big Brothers Big Sisters has served as Broward’s preeminent youth-service organization since 1973.
See More Past Events
Forgot Password?