Entertainment: The Music of Nicole Henry

Of note: The presence of will known professional athletes, past and present, who come to not only honor the 2006 Inspire Greatness Honorees but the young athelets from Special Olympics Miami-Dade County 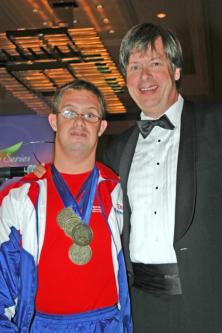 Beautiful works of art by Maestro Jesus Fuertes were on display for the Silent Auction.  The Maestro was born in Madrid, Spain the son of an intellectual bohemian poet whose friends included international artists like Pablo Picasso, Salvador Dali, Federico Carcia Lorca, Rafael Alberti & others.

Other artists and auction items were displayed in a wonderful setting in downtown Miami at the Four Seasons Hotel.

The Special Olympics Miami-Dade County, serves more than 3000 athletes and families in the Miami-Dade County area, and as Courney R. Thompson, 2006 Inspire Greatness Chairperson wrote, "gives hope to Athletes & Families alike".  She also said "Inspire Greatness 2006 is about celebrating our future as well as our past....so celebrate our contributions tonight, celebrate the Athletes and the work we are doing together".

Music was provided by Nicole Henry

Support for this event came from the  the Honorees, the sponsors, the guests, the athletes of our community and the Special Olympic Medalists.