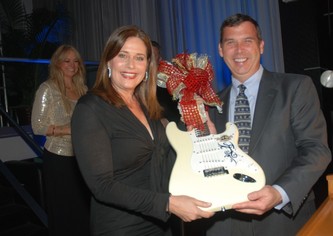 Seminole Hard Rock Hotel & Casino Winterfest Boat Parade Grand Marshall Reception held at Spirits Nightclub
Lorraine Bracco was honored at the Grand Marshall reception by Ft. Lauderdale Mayor Jim Nagle with a key to the city, Vice Mayor Broward County with a key to Broward County, NSU by awarding her with an official "Shark" sweatshirt, River Walk Trust's Ginny Miller and Renee Quinn presented a Brick in her name to be installed on the Celebrity Walk of Fame on the New River and Phil Madow, President of Seminole Hard Rock Hotel & Casino with an official Hard Rock Guitar.
Said Bracco “ I am going to need a boat to get all these awards home” and “I have never gotten a key to a city, nor a county” as she graciously accepted the tokens from each organization.
Lorraine Bracco walked through the crowd of Dignitaries, sponsors and local VIP's and posed for numerous photos, and talked and mingled with many of the guests.
Lorraine Bracco was most recently part of the HBO series the Sopranos, playing psychiatrist Dr. Jennifer Melfi, who treated New Jersey mafia heavyweight Tony Soprano. Her understated portrayal earned her multiple Emmy, Golden Glob and Screen Actors Guild Award nominations for Best Actress in a TV Drama.
See More Past Events
Forgot Password?