What: Ritz Carlton Key Biscayne Grand Opening of their RUMBAR with celebrity guest Andy Garcia and a fundraiser for DRI

Music: Grupo Nostalgia - who performs every Wed - Sat at the RUMBAR 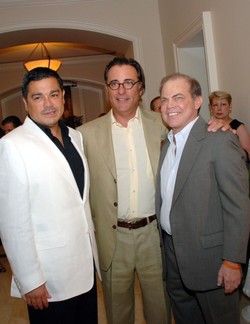 All proceeds from The Ritz-Carlton “Community Footprints” evening benefited Diabetes Research Institute at the University of Miami School of Medicine and raised more than $23,000 through donations and a silent auction that included luxe items such as Ritz-Carlton hotel stays and conga drums, movie posters, DVDs and a Titleist golf bag autographed by Andy Garcia.

Garcia brought down the house when he jammed with Grupo Nostalgia, playing the piano and congas to a cheering crowd, before leading them like the Pied Piper to watch The Lost City in a ballroom that was transformed to look like a vintage supper club. The decadent evening continued with VIPs feasting on gourmet snacks set on each table and enjoying an open bar throughout the film.  Guests stayed well into the night and begged Grupo Nostalgia to keep performing until 2 a.m. where the crowd continued to dance in the RUMBAR and the resort’s lobby, saying it was the only band of its kind in .

Michelle Payer, The resort’s PR director, initially called Andy Garcia several months ago after seeing his movie The Lost City and seeing the connection between the movie scenes and the RUMBAR concept. In the midst of his worldwide premieres for Oceans 13, the Oscar-winner graciously accepted the invitation to open RUMBAR to benefit Diabetes Research Institute at the University of Miami School of Medicine, an organization that’s close to his heart.