What: Symphony of the Americas Society and Bruce Rossmeyer's Harley-Davidson Honor Mary Porter at Ruggero's Bistro

Beneficiary: Symphony of the Americas Society 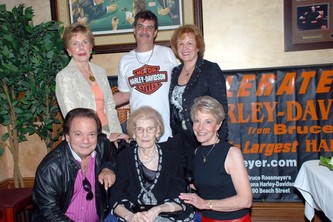 Music, Motorcycles & Mary (Porter)
Was A ‘Roaring’ Success For
The Symphony of the Americas Society
Membership Bash
A capacity crowd joined friends and supporters of the Symphony of the Americas to pay special tribute to philanthropist Mary Porter at Ruggero’s Bistro recently. With the theme, ‘Music, Motorcycles & Mary' (Porter), most of the guests got into the spirit of the evening by wearing ‘Biker Chic’. To emphasize the motorcycle theme, an honor guard of well-known ‘bikers’, met Mary’s motorcade from her Bay Colony estate and escorted Mary and some personal friends to the nearby restaurant. Those participating in the escort included Toni Lynn Mawby, a member of ‘Harley’s Angels’ who has been riding motorcycles since she was 13 years old, Mickey Markoff, Producer of the Air & Sea Show, John Brogno, Harley-Davidson Sales Manager in Fort Lauderdale, Richie Supa, songwriter formerly with Aerosmith, Eddie Trotta, who’s been building custom motorcycles for 20 years and Jon Compton, movie and song producer.
When Mary arrived, she was treated to a display of about a half dozen Harley Davidson Motorcycles, courtesy of Bruce Rossmeyer, who is the largest Harley Davidson dealer in the country and a co-owner of Ruggero’s Bistro. The Symphony’s Maestro, James Brooks-Bruzzese was on hand to make each and every person feel welcome. To add to the festivities, Mary handed a check for $25,000.00 to members of the Symphony Society, who will turn the entire amount over to the Symphony of the Americas, bringing the amount they raised to over $100,000.00!
While almost everyone in Broward County knows Mary Porter as a caring and gentle woman, few know that in her earlier years, she loved and owned motorcycles!! “Mary confided in me that while her father was totally against her having a motorcycle, she actually bought one unbeknownst to him… took it home… charmed him into going for a ride; after which he relented and gave her the ok to have it… She loved riding a motorcycle so much, she bought another one… with a side car,” explained Lesleen Bolt, VP of the Symphony of the Americas Society.
Throughout the evening, CD music with a decided motorcycle theme was played. Members and friends enjoyed a lavish food presentation, thanks to Executive Chef & General Manager Paul Riso. Even Paul’s fiancée, Leslie Tipton, helped out behind one of the bars to dispense spirits and wine. Ruggero’s Bistro is at 2671 East Oakland Park Boulevard in Fort Lauderdale.
Chairwoman Liz Hopwood, who flew back from her summer home in Virginia, was all smiles throughout the evening, seeing everyone enjoying themselves and having a great time! “This event was a fitting finale to our fund-raising season and it was yet another opportunity to introduce the Symphony of the Americas to a wider group of people.”
“We’re so grateful for Tommy Ruzzano, Rossmeyer’s Promotional & Special Events Coordinator, and Marty Levy, Director of Operations, for enthusiastically embracing our project. They saw the potential of a great membership/fundraiser and have went above and beyond to help us create a truly unique evening for our guests and for Mary Porter,” Ann Clark noted. Ms. Clark is the President of the Symphony Society.  “There were many friends of Mary’s from other non-profits she has generously supported over the years.”
The Committee working on this special event included: Pam Masters, Milt Drewer, Kevin Lane, Jennifer and Robert Roselli, JoAnne and Oren Lewis, Dr. Peter Babinski, Kathy Ziegler, Jean Paul Pfister, Stephen Keller, Beverly and Nick DiNunzio, Ed Mena, and KayeLynne and Tom Northcutt.
In addition to several years of financial support through the Symphony of the Americas Society, Mary is a major underwriter of the popular Summerfest – a series of concerts performed around the State, many in outdoor venues.
The SOAS is the support group for the Symphony of the Americas, which is celebrating their 19th year of continuous performance and is considered ‘Broward’s Symphony Orchestra.’ For information on the Symphony or the Society, call (954) 713-8394
The Image Development Team:  P.O. Box 30517 – Ft. Lauderdale, Fl 33303 – (954) 467-2624 – Fax (954) 467-2642:
Contact: Kevin Lane (954) 467-2624
See More Past Events
Forgot Password?