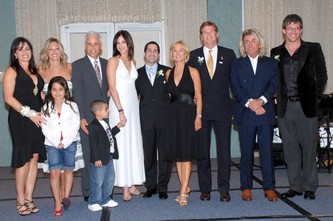 - A woman and a man raised more than $80,000 for blood cancer research and patient services, making them the winner of this year’s Man & Woman of the Year of The Leukemia & Lymphoma Society’s South Florida Chapter.

The two winners, Jeff Backman of , and Connie Chaney of , were the top local fundraisers and will now be entered into the national competition for Man & Woman of the Year.

During an eight week fundraising period beginning with a kickoff celebration, the candidates were judged solely on their success in raising money to help the Society fund research to find cures and better therapies and provide information and support to blood cancer patients and their families.

Every dollar raised counts as one “vote.” Jeff Backman and Connie Chaney were the candidates with the most “votes,” and were awarded the title of 2007 Man & Woman of the Year at a grand finale celebration on . The candidates competed in honor of the Society’s Boy & Girl of the Year, local children who are blood cancer survivors and sources of inspiration to others.

Jeff Backman is married and a proud daddy to a newborn baby girl named Blake Michelle. He is an attorney with the law firm of Adorno & Yoss, and his passion to help his clients, coupled with his love of the law, has lead him to great success.

Connie Chaney is the owner of the 5-story, Space Plus Self-Storage, facility in , that has been voted the “Best Storage Facility” for 2004 and 2005 by Sun-Sentinel. In 2005 she was named the Small Business Owner and Person of the year by the and Broward County Chamber of Commerce. She is involved in numerous organizations in .

About The Leukemia & Lymphoma Society

The Leukemia & Lymphoma Society®, headquartered in , , with 66 chapters in the and , is the world’s largest voluntary health organization dedicated to funding blood cancer research and providing education and patient services. The Society’s mission: Cure leukemia, lymphoma, Hodgkin’s disease and myeloma, and improve the quality of life of patients and their families. Since its founding in 1949, the Society has invested more than $486 million in research specifically targeting leukemia, lymphoma and myeloma. Last year alone, the Society made 4.2 million contacts with patients, caregivers and healthcare professionals.

For more information about blood cancer, visit www.LLS.org or call the Society’s Information Resource Center (IRC), a call center staffed by master's level social workers, nurses and health educators who provide information, support and resources to patients and their families and caregivers. IRC information specialists are available at (800) 955-4572, Monday through Friday, 9 a.m. to 6 p.m. ET.