What: Thousands of Dolphin fans come to Dolphin training camp to Draft Party 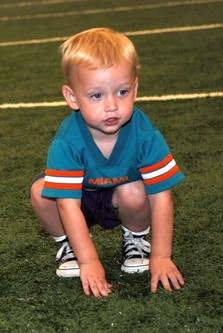 Thousands of hopeful fans came to the Miami Dolphins training camp in Davie, Florida to be a part of the 2007 Dolphin Draft party.

Many fans had anticipated Notre Dame quarterback Brady Quinn to be the 1sr round draft pick and showed their disappointment when Coach Cameron came out later and gave Ted Ginn his "thumbs up" to the sounds of the "boo birds".

Coach Cameron stood by the choice made by the Miami Dolphins and later in the draft a quarterback was picked up from BYU by the name of John Beck.

Hawaii seemed to be the area of choice for the Miami Dolphins draft team, as they picked up some heavy hitters from that area and then went all over the U. S. of A. for the remaining picks.