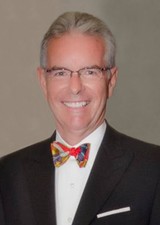 PATRICK J. FLYNN  is a native of New York City and graduate of Manhattan College and the University of Miami.  He moved from New York to Fort Lauderdale in 1973.  After spending time teaching and as a orchestral musician,  Patrick became the General Manger of the Opera Guild of Fort Lauderdale in 1980.  He played a leadership role in creating Florida Grand Opera from a merger of the Greater Miami Opera and Opera Guild of Fort Lauderdale, creating, at that time, the 11th largest opera company in the U.S.  He remained as Managing Director of Florida Grand Opera in Broward County through 2007 when he was recruited by the Museum of Discovery and Science.

Since joining the Museum as Executive Vice President of Development he led a successful $25 million campaign to build the new EcoDiscovery Center,  doubling the Museum’s exhibit space.  In addition to the capital expansion, Patrick directs and oversees all of the Museum’s fundraising activities, including two major events each year which were attended by over 2,700 guests this year and raised over $700,000.  He is currently leading the $7.5 million campaign for the Museum’s latest expansion: a half-acre Science Park and some vital renovations in the 20-year old Museum building.


Patrick has served as a member and former Chairman of the Broward Cultural Council,  was a founding member of the Riverwalk A&E Consortium and served on the Riverwalk Trust for three years.   He has also served on a number of State and local grant panels in music and the  arts.  His hobbies include travel, photography, music and gardening.

Patrick lives in Fort Lauderdale with his wife, Karen and son, Elliott.

Going back to when you first started with your organization to now, what has been your proudest personal accomplishment?
Successfully raising the $25 million needed to build the Museum’s EcoDiscovery Center in the midst of the worst financial meltdown in decades.

What do you enjoy the most about your work?
The people I meet. During my opera years, I met a number of amazing people, many of whom were of an older generation, some very, very wealthy, who taught me so much about the world, important things in life, an appreciation of style, the enjoyment of life, and humility. At the Museum, it’s been a treat to get to know the many dynamic and accomplished younger people on our board, as well as a very dedicated, talented staff.

You are out in the public arena quite often; who is the most interesting person you have ever met?
I’m not sure if he was the most interesting, but in my opinion the greatest opera singer of all time: Luciano Pavarotti.  I played in the opera orchestra for him years ago and later met him when I was managing the Opera.

Is there a charitable event(s) you really look forward to attending each year?
By far the Museum’s annual gala. It’s a gigantic logistical challenge, but we have an extraordinary team, both on the board and staff, who take great pride in making it better each year. Last year I think MAD for MODS hit the high water mark with over 650 people attending and $500,000 raised.

What is your greatest challenge at this time?
Completing the Museum’s $7.5 million campaign to build an incredible Science Park right behind the Museum on Broward Boulevard, along with some very important upgrades inside the older part of the building and a new digital IMAX projector.  We have about $3 million to go!

What is the most important thing you have learned through the years?
To enjoy each day, especially with family and friends, because time passes pretty quickly.

How have things changed for you through the years?
I think I’ve learned the importance of balance in my life, especially the value of time with family and friends and not being quite so obsessive about work.

Do you have a favorite vacation spot?
The top deck on one of my favorite cruise lines: Regent or Silversea.

What do you still hope to accomplish?  To learn how to play the piano well.

What is something your parents taught you that you will never forget?
I had wonderful parents who inspired me to be a good person. Two valuable things I learned from my father are: if you’re going to do something, do it right, and keep your eyes on the road!

Who is your hero?  My wife, Karen, who retires this year after 35 years of teaching public school.  She jumps out of bed every morning at 4:30, does school work nearly every night and weekend, and loves kids, especially her first graders. Imagine how many children she’s taught how to read and the impact she’s had on all those lives!

What is your proudest achievement?
Having a wonderful son, Elliott, who has brought his parents so much joy and happiness.