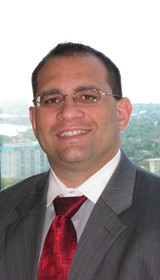 Resident: Lauderdale By the Sea

Story by: Blacktie-Southflorida - submitted by March of Dimes

Jorge C. Garrido, RFC, LUTCF
Jorge C. Garrido is President of Garrido & Associates Financial Strategies Group, a full service financial and investment management services boutique focusing on family legacy and retirement planning, as well as financial planning for small businesses and individuals. Jorge’s work with his clients to create strategies that help them achieve their financial goals is aided and supported by the financial strength and local resources of AXA Advisors, a member of the global AXA Group. Jorge resides in Lauderdale By The Sea and is a devoted husband and father of three wonderful children.
Jorge was born in Cuba and immigrated with his family to the United States in 1980. He graduated from the United States Coast Guard Academy in New London, Connecticut with a BS in Economics and Management and received his commission as an officer in the United States Coast Guard in 1994. He participated in one of the largest maritime rescue operations in history in 1994 when more than 25,000 Cuban rafters fleeing Cuba for freedom were rescued at sea in the Florida Straits. For his dedication, honorable service and devotion to duty, he was awarded the Coast Guard’s Achievement Medal, Commendation Medal, and Humanitarian Service Medal.

I was a friend of Lisa's years ago but I live in Boston. I am so proud of her and new she would accomplish positive things in her work and outside life. I miss Lisa and wish her the best.
Beth (Gregorio) O'Halloran
21-Jul-10

It is an honor to have you on my website Have You Met feature.
Ginny Fujino
20-Jul-10