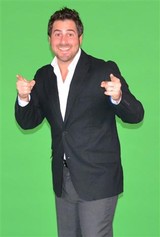 Born and raised in South Florida,Evan Golden now resides in Coral Springs, Florida. He grew up playing many sports and excelled in Tennis, where he was USTA 10 and under champion. In high school at Marjory Stoneman Douglas in Parkland, Florida he started falling in love with the camera co-hosting the schools news program.


Evan came upon his entertainment career in a moment of serendipity. While accompanying his sister to anMTV audition, Evan was spotted by MTV producers and asked to audition for a special with Carmen Electra and Evan got that part and made a statement. From there he was asked to appear on the WB Television Network now CW first ever Prom Special. Golden also guest appeared on other programs like “Trigger Happy TV“, “The Mandy Moore Show” and “Wanna Come In?” on MTV. After interning at WPLG Channel 10 ABC network affiliated and graduating from the University of Central Florida in Orlando, Florida with a degree in Interpersonal Communications and Film, he continued pursuing a career in the entertainment industry.


You may have seen Evan in national television advertisements for Ovaltine, where you can hear him say that famous tag line, “More Ovaltine Please!” He has also appeared in commercials for the Walt Disney Wilderness Lodge, Bowman’s Online Sports, Orange, E! and Rockstar Energy Drink.
Evan’s quick wit and charisma landed him the gig as host of local Entertainment TV shows in the Orlando and Miami areas. His first job as an entertainment reporter was for Orlando Live and then a pilot for VideoFame.


The producers of VideoFame were so impressed with the show’s pilot, they decided to increase the budget and give him his own show called A-List TV which is set to air in the Miami market in 2006.


Evan is most recognized for his lead role in the highly publicized reality show titled, “Ivana Young Man“, Hosted by Ivana Trump. Seen on the Oxygen Network and W Network in Canada.


He was the host for the first 2 episode of Shut Up and Model, a reality TV series, which syndicated throughout the world and produced by One Model Place.


Love and fatherhood has took him into a production role back down to Florida to be near family. He is now a successful television producer and you can watch him as the Host of Eye on South Florida bringing awareness from charities and fundraisers around the community.

What do you enjoy the most about your work?
My true passion has always been entertainment reporting. Having the opportunity to be the Host and Report for Eye on South Florida is a dream come true. I am able to do what I love in the community that I love. It’s extremely rewarding to share all the positive events and educate our viewers how they can get involved and give back.

How do we get our young people more interested in charitable giving and community volunteering?
It’s very easy to get caught up in your own life and live with that out of sight out of mind dilemma. It comes down to education and making people aware that their actions can go a long way. Most organization are not just looking for financial contributions but looking for volunteers, people that help spread awareness or give gifts or prayers. When the opportunity arises to make a difference, touch a heart or change a life and you see how rewarding it is, there is nothing more gratifying.

You are out in the public arena quite often; who is the most interesting person you have ever met? I have had the opportunity to meet and interview some mega A-List celebrities from Jaime Foxx, Sarah Jessica Parker and Donald Trump but the most interesting and memorable person is Lainie Mara Jones. She is not even 30 yet and has battled cancer five times. She is such an inspiration and role model. From her attitude, strength and her inner and outer beauty she is someone I will always look up to. She is a leader and has helped guide and support so many people dealing with cancer.

What is the most important thing you have learned through the years?
When I was modeling early in my career it was very easy to become selfish and vein. As you grow older and have children, you quickly realize it’s not all about you. You realize what truly makes you happy and see how meaningful life really is.

Is there a fond childhood memory you can share with us?
Till this day always growing up with strong family values and doing things as a family. Always spent a lot of time with grandparents, cousins and taking family vacations were always the best. I also remember always having something to do. My parents kept me very busy with so many different activities in arts and sports, it definitely help culture me.

How do you stay so motivated and committed?
I have always had a good work ethic. My parents taught me at a young age the value of a dollar and I started working in my local parks concession stand at the age of 10. I have been living with the motto now for a while, “don’t say no, just go.” And what that means to me; is don’t be lazy. Go visit friends and family. Go the extra mile. Always represent yourself in a professional matter. As a parent, I never want to let my kids down and commitment and motivation are keys attributes in being successful in anything in life. People just have to find out what motivates them personally.

What’s the best movie you have ever seen?
Rudy, starring Sean Astin. The movie teaches you such an important life lesson. People are always going to doubt you and challenge in many different circumstances. If you have a dream than go after it and give it all you got. The worst thing for me is if I want something and I don’t even try! In life there will always be obstacles, you just can’t be afraid to overcome them.

Do you have a Fashion Addiction?
I do have a slight Fashion addiction that has made my closet collapse about five times. I have a thing for blazers or suit jackets. I have about 40 different ones and it’s just my style. You can throw one on, and all of sudden people think you are so dressed up. I like the versatile ability to wear with just a T-Shirt or with jeans or fully equipped with a suit and tie.

What are your favorite sports?
My favorite sports are basketball and football. My father and I go to every Miami Dolphins game together and it’s such a special tradition and bonding experience for the both of us.

What is your favorite restaurant?
My favorite restaurant is Falafel Bistro in Coral Springs, FL. The food is so delicious but what makes me a regular customer is the Owner/Chef Ilan Cohen. He has created a cozy café environment and he goes above and beyond to make sure every table is completely satisfied. It’s nice to see how much he cares about the quality of the food and the overall experience.

What do you have to say to all the young women/men out there ready to take on the future? Be nicer to people. Don’t be lazy. If you have a goal or a dream, than go after it. Do what makes you happy. I know all the young people love the saying YOLO, but rather just saying it, do it. Actions ALWAYS speak louder than words.