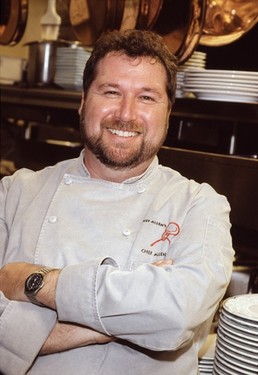 Chef Allen’s reputation has been built primarily on New World Cuisines and unwavering attention to service.  In recent years Chef Allen has delivered a combination of directions including French, , and Latin influences.

He has always been proactive and diligent in trends and strong culinary ideas.  At his Aventura restaurant, he has changed the way dines.

He is again cutting new ground in cuisine, service, and style.  Chef Allen once again will lead the South Florida Epicurean trend, to generate new interest while sustaining existing success.  But more importantly, to challenge the standards with new ideas and directions.

“My cross - cultural tropical cuisine, which began with New World Cuisine more that 15 years ago, has been and continues to evolve. My vision of what the future holds is a culinary fusion of cultures that share similar landscapes. The cuisines derived from the Caribbean, Latin America, the Pacific Rim and the tropical are ideal for fusion in a sweet, spicy and aromatic harmony. Together they marry well, each offering a diverse spice box full of exotic flavors. My new Palm Tree Cuisine is fresh and flavorful, like a tropical vacation on a plate.”

Cuisine:  Creative and innovative cooking has always been a long –standing trademark of Chef Allen's.  His cuisine encompasses the foods, cultures and techniques from our world village of the Mediterranean, the , Latin America and the .  These broad, diverse flavors and techniques share a common thread in Chef Allen’s hands.  That is his careful, deliberate and knowledgeable approach to the fusion of their exotic spices and ingredients.

Some of Chef Allen’s accomplishments include: