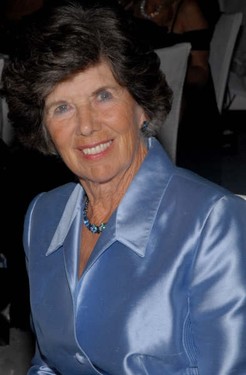 Education: Bachelor of Arts degree and law degree from the George Washington University

BUNNY BASTIAN
Bunny Bastian was born in Washington, D.C., and lived there until 1984, when she moved to Coral Gables. She received a Bachelor of Arts degree and a law degree from the George Washington University and was admitted to practice in the District of Columbia and Virginia. She married a fellow law student, the late James Bastian. She is the mother of four children and has eight grandchildren. Her interests include tennis, snow skiing and travel.
Bunny’s career included employment in the Office of the Solicitor in the U.S. Department of Labor in Washington, D.C., where her work mostly involved cases related to minimum wages, overtime, child labor, and equal pay. After moving to South Florida, she was employed as a vice president of Southern Air Transport, Inc. until 1998. She is currently the president of SAT Group, Inc.
Bunny has been involved in many Miami organizations since she arrived here.   She has been active in her parish as an officer in the Epiphany Catholic Women’s Club and as a lector and Eucharistic minister in the Church of the Epiphany. She is serving as a member of the Tiffany Circle Steering Committee and as a trustee for the American Red Cross Greater Miami and the Keys Chapter and on the Board of Directors for the Jackson Memorial Foundation, where she is vice chairman of the Golden Angels and recipient of their Rainmaker Award. She is serving as a member of the Board of Trustees for Carrollton School of the Sacred Heart, a member of the Brickell Avenue Literary Society, the University of Miami Dade County Women’s Guild, and the Director’s Circle of the Lowe Art Museum, an Honorary Member of Beaux Arts, and a member of the Fellows Program of Fairchild Tropical Gardens, where she is the co-chair of the 2008 Fairchild Gala, and. She was the Chairman of the 2007 Children’s Home Society Pink & Blue Ball and is co-chair of the Hope for All Ball to benefit Camillus House and the Tenth Annual Mayor’s Ball to benefit United Way of Miami-Dade. She has been honored as a March of Dimes Leading Lady and as an Honored Host for “Tiffany Celebrates the Hosts” honoring the Jackson Memorial Foundation. She is an Excalibur Lady Godiva of Project: New Born and was selected as one of the American Cancer Society’s Inner Circle of 12 for 2008. She was chosen as a 2007 Woman of Substance & Style by the Miami Project to Cure Paralysis, and in October, she was honored by The Messengers of Peace Association. In the same month, she was named the recipient of the Monsignor Bryan O. Walsh award by Catholic Charities of the Archdiocese of Miami.

You are out in the public arena quite often: who is the most interesting person you have ever met?

One of the most interesting people I have met was Ronald Reagan.  He was relaxed and ready to discuss matters in an engaging manner.  Others have been people of substance.  I enjoy hearing about matters concerning our country or community from people with first-hand knowledge.

What program with your organization do you get the most excited about?

I get excited about programs that are community support programs and those that offer the greatest amount of help to people in need (especially children).

Is there a charitable event(s) you really look forward to attending each year?

Every year, I look forward to attending the Cruise to Nowhere.  (This year, the “Hope for All Ball” benefiting Camillus House and the “Tenth Annual Mayor’s Ball” which supported The United Way was a wonderful event.)

How have things changed for you through the years?

Through the years things just keep getting better and better.

What is your greatest strength that makes you such an asset to your organization?

My greatest strength for organization support is probably my enthusiasm for the challenges.

What do you think is the biggest problem we are facing in this country today?

I think the biggest problem we are facing today is terrorism.  This is a very serious threat and most difficult to defeat.  I think it begins with teaching little children to hate before they even know what they are hating; preaching to annihilate the infidel; and providing a setting for carrying this out.

Is there a charitable event(s) you look forward to attending each year?

I look forward to attending the Beaux Arts Ball each year.  It is the oldest costume ball in and always has many young and exuberant attendees—always fun.  I also look forward to the Fairchild Tropical Gardens Gala because it is elegant and in such a unique setting.  The Jackson Memorial Foundation Ball always has good friends in attendance.  The Miami Science Museum Gala is lots of fun.  The Children’s Home Society Ball is exciting (possibly because I chaired it last February).  The gala by the Young Patronesses of the Opera is an elegant one.  The Red Cross Ball always has an enthusiastic group of young people involved in presenting it and attending it so everybody has a good time.  Of course, this year the Spirit of Charity Gala was wonderful for me as the Catholic Charities of the Archdiocese of Miami honored me with the Monsignor Bryan O. Walsh award.

What is your proudest achievement?

My proudest achievement is the rearing of my four children.

Life should be a celebration.  Every day brings new experiences and new challenges, and wonderful things to enjoy.  I look forward to every new day and every new thing.

Is there a special "aha" moment in your life when you know "I get it now!"?

There has been no “aha” moment as yet.  I am still waiting.

You are a very capable and talented woman, what other talent(s) do you wish you had been born with?

I would have loved to have been born with a singing voice that did not require those in my near vicinity to cover their ears and a 90 mile per hour tennis serve.

What is your greated weakness?

My greatest weakness is for chocolate pecan turtles.

What is your greatest strength?

I am most disciplined about getting up each morning to attend   I go to church every morning  for the 8 o’clock Mass unless I have to attend a meeting or tennis game earlier than 9 a.m., in which case I attend the 6:30 Mass.

If there were a movie being made about your life, what actress would best play you?

If there were a movie made about my life, I would have loved to have had Gilda Radner play my role.

I would say to the young people of today to get an education, work hard, and help others.

How do we get young people more interested in charitable giving and community volunteering?

Young people should get started by giving what they can even though it might be a small amount and doing whatever they can.  Once they contribute, they will be inspired to do more because of the mental rewards the giver receives.