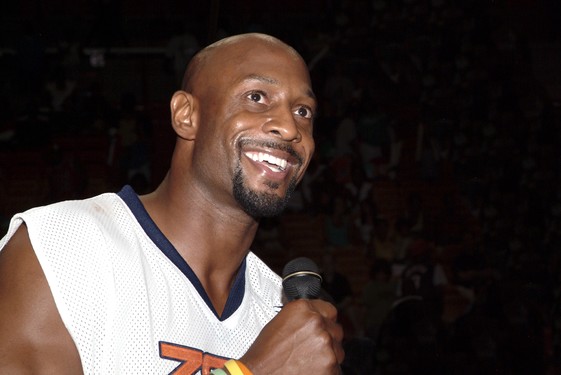 Education: Graduated from Georgetown University in 1992 with a degree in Sociology

Q&A with Alonzo Mourning – his thoughts on life, his charity work and  Zo’s Summer Groove

Q: What is Alonzo Mourning Charities all about?

A: AMC is a non-profit foundation that raises money to support programs designed to help our youth of promise. Since 1997, we’ve raised more than $6 million for a number of different organizations that help kids.

We support the Overtown Youth Center, which provides educational and recreational activities for kids in Overtown. We also help fund my wife Tracy’s initiative, the Honey Shine Mentoring Program, which pairs young women in at-risk situation with mentors.  The funds we grant are raised through various annual events one of which is Zo’s Summer Groove, held in Miami during the summer.

Q: Can you talk a little about Zo’s Summer Groove?

A: ZSG is a five-day fundraiser that features events like youth basketball clinics, a youth summit, block party and an all-star basketball game. We invite over 2,000 children in both Miami-Dade and Broward Counties to the basketball clinics, where they’ll get to practice the fundamentals with the league’s most caring players, and learn the importance of discipline and persistence off the court.

ZSG All-Star Game, give fans and supporters a chance to come out and see some of the league’s best players and support a great cause.

Q: Are there any other opportunities at ZSG for the public to support the cause?

A:  A golf tournament and benefit dinner, and we’ll also a great comedy show on which was hosted this year (2007) by Katt Williams, and featured Mike Epps, Gary Owen, Marvin Dixon and Benji Brown. Just like the basketball game, you can buy tickets for the golf tournament, benefit dinner and comedy show online.  Watch for updates for the 2008 event.

Q: What inspired you to begin your charity work? And who inspires you on the court?

A: My wife Tracy, who I met through a mutual high school friend, inspired me with her passion to help others, and in creating AMC, I was inspired by the need for an organization that could help create lasting changes in the lives of children.

On the court, I’ve always been inspired by Patrick Ewing’s style of play.

Q: Supporting foster children is a large component of the work you do. How did your experience as a foster child affect your life?

A: When my parents divorced, it was arranged that I would live with a family friend, Fanny Threet. She helped me understand that regardless of the situation, there are people who can provide the same type of love and encouragement as my parents.

For those who are thinking of becoming foster parents, I want to stress that there’s a need; kids out there need help. To children living in foster homes, I want you to know that you should feel fortunate regardless of how bad your situation. There are people who care and believe in you.

Q: What do you and your wife Tracy consider to be the pillars of good parenting?

A: Being good listeners and good role models. This also comes into play with the work we do at AMC. We support programs that give kids a chance to interact every day with people who set a good example.

Q: Would you encourage your children to become athletes, or would you like them to take another path?

A: While they’re growing up, I’ll encourage them to do whatever makes them happy--whether it’s becoming a professional athlete or not.

Athletics teach important lessons – like teamwork, the value of keeping fit and being healthy mentally, physically and especially spiritually. Tracy and I definitely encourage these good habits – but we’ll support the path that makes them happiest.

Q: One of the many lessons kids take away from AMC programs is about the importance of healthy eating and exercise. How do you stay in shape?

A: To maintain a healthy diet, I eat raw foods, anything low in sodium, vegetables, little fried food, no red meat or pork, and a lot of fish and grain products. In the off season, I participate in yoga, weight training and spinning.

Upon graduating from Georgetown University in 1992 with a degree in Sociology, Alonzo was selected in the first round—second pick overall—by the Charlotte Hornets in the NBA draft. After completing a successful three years with the Hornets, a series of transactions led Alonzo to seven years with the Miami Heat and then 1.5 seasons with the New Jersey Nets. Alonzo headed back to Miami in 2005 as a free agent, where he led the Heat to the NBA finals and the franchise’s first Championship in the 2005-2006 season.

After being diagnosed with Focal Glomerulosclerosis (FSGS), a degenerative kidney ailment, at the start of the 2000-2001 season, Alonzo personally lead a campaign to raise a minimum of $2 million in funds for research, education and testing to fight FSGS. He returned to the court the same year to play in the final 13 games of the season.

Off the court, Alonzo has dedicated himself to creating positive and lasting changes in the lives of children. He has focused his community involvement on becoming an outspoken advocate for youth initiatives and foster care programs that assist abused, abandoned and neglected kids.

Spearheaded by Mourning, Alonzo Mourning Charities was created to provide support and services that enhance the lives of youth of promise. Since 1997, AMC has raised more than $6 million for various organizations that aid in the development of children and families living in at-risk situations.

For more information on ZSG: http://www.zsg.com/